During one of his recent Aurora and Night Photography workshops, Alaska-based photographer and instructor Frank Stelges had an interesting idea: what if you tried to photograph spinning steel wool from above?

Stelges runs the photography school Aurora Bear, so he spends a lot of nights outside teaching people how to photograph the Northern Lights. Unfortunately, the Northern Lights don’t always cooperate, and so he’s sometimes forced to come up with “fun and creative diversions” to keep his students entertained and learning.

Rewind to a workshop last week:

“We had the McKay Photography Academy as guests for three nights, and since the Aurora wasn’t coming out that evening we thought we’d try something new,” Stelges tells PetaPixel. “My friend Toby Gelston from photorec.tv had the idea to do some steel wool photography so that our guests could play with some manual settings and get some interesting pics.”

So Frank broke out his Nikon D4s and started taking some shots while Toby manned the steel wool: 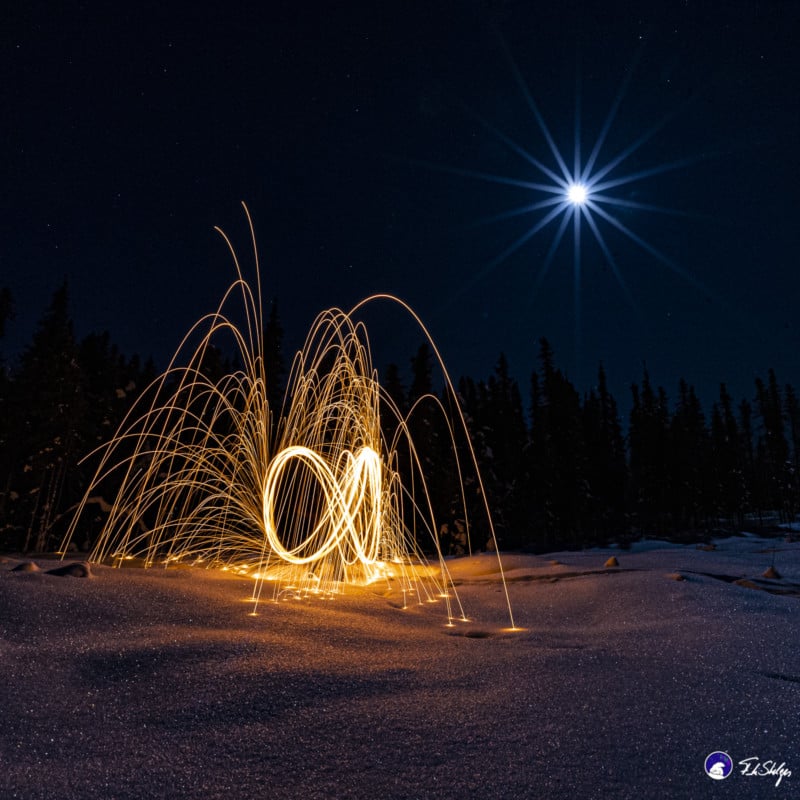 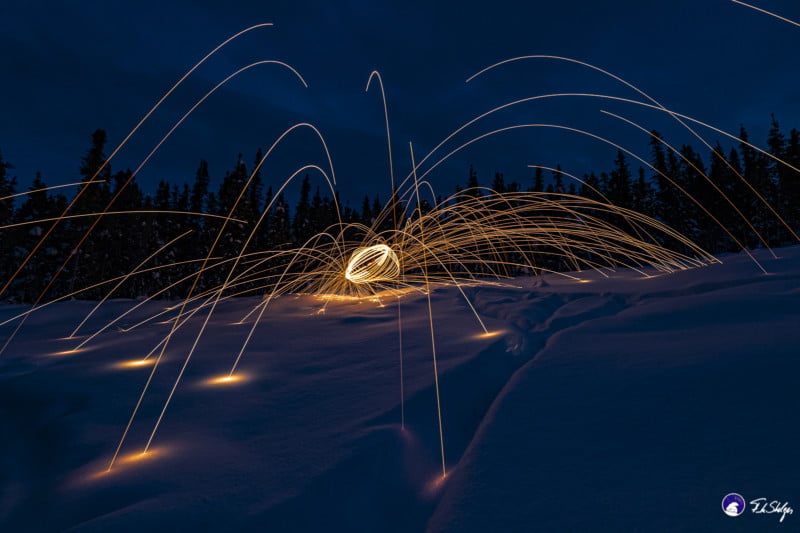 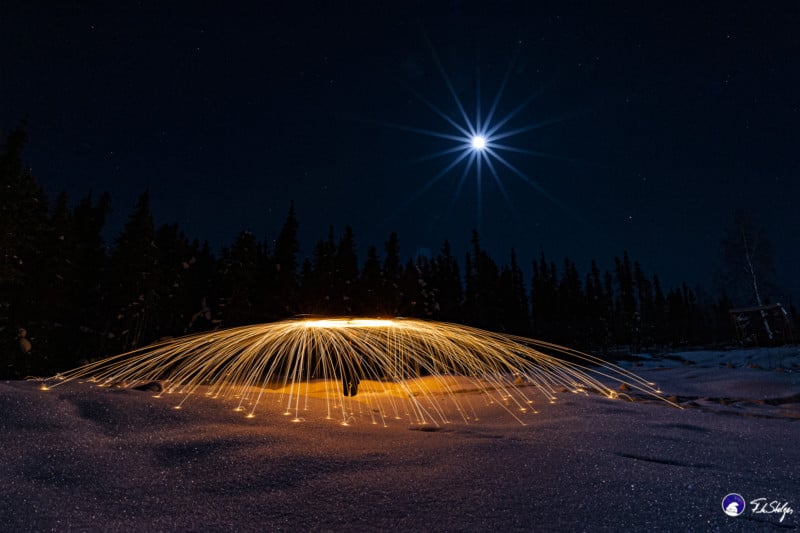 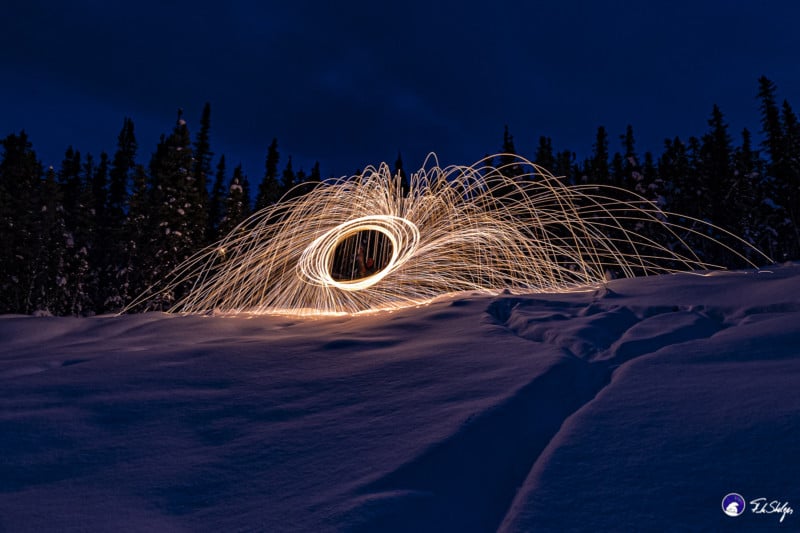 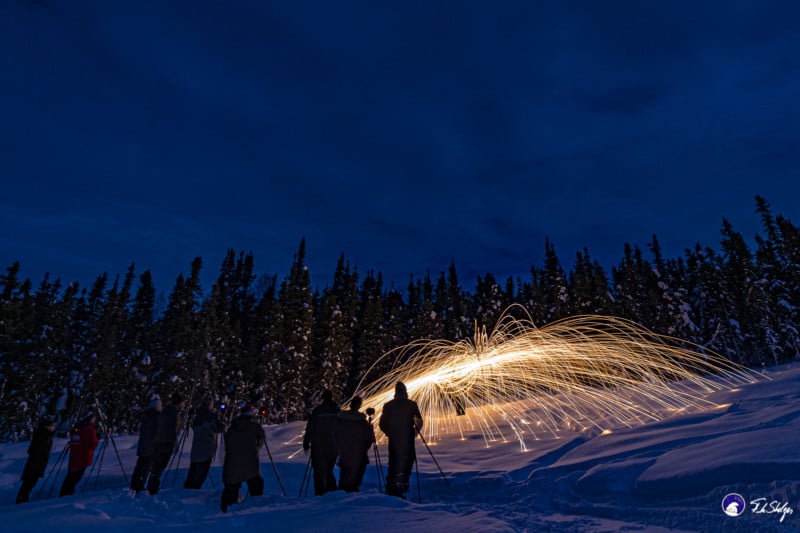 But it didn’t take long for the idea to take flight… literally.

“After the first round, we took a look at the pics (which looked really cool) and I said that it would probably look awesome from space,” recalls Stelges. “We stared at each other for a second and then both said ‘Drone!’ at the same time. So I got out my DJI Mavic Pro, adjusted some settings and gave it a try…”

Acquiring focus and dialing in the right settings was a bit of a challenge. ISO 6400 on the Mavic Pro was just too noisy, so he wound up reverting to similar settings as he was using on the ground with his DSLR: 8 seconds, f/8, and ISO 800. The drone pretty much took care of the rest.

“I tried the mode with a fixed gimbal but that didn’t work very well,” says Stelges. “I just ended up using the normal mode—the flight stabilization and the gimbal together work so perfectly in the Mavic Pro that you see only a tiny bit of movement in the stars but not in the trails of the glowing steel wool sparks – and that’s an 8-second long exposure!”

As for the results, well, we’ll let you be the judge. But we will say that until we saw these, we were pretty sure Steel Wool had been done to death. Now we’re not so sure: 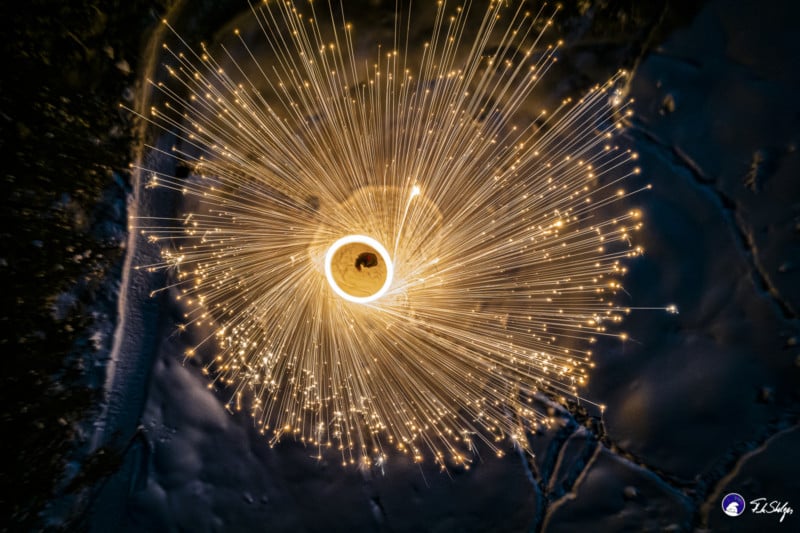 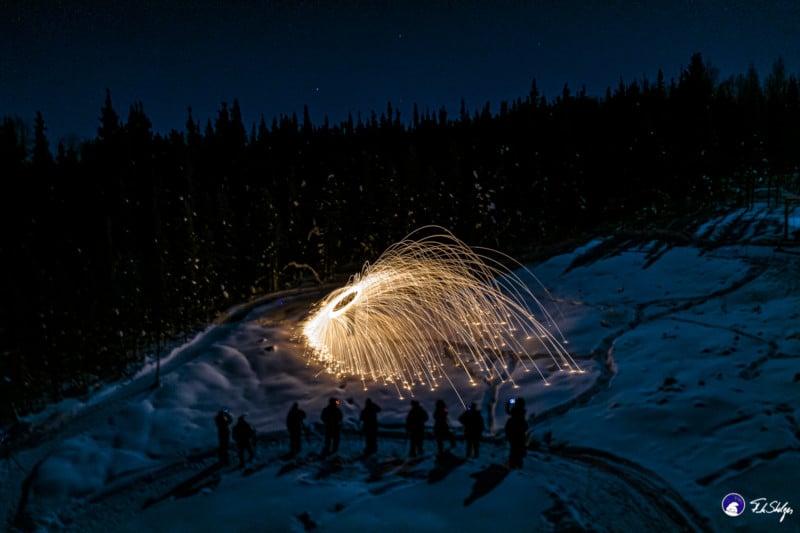 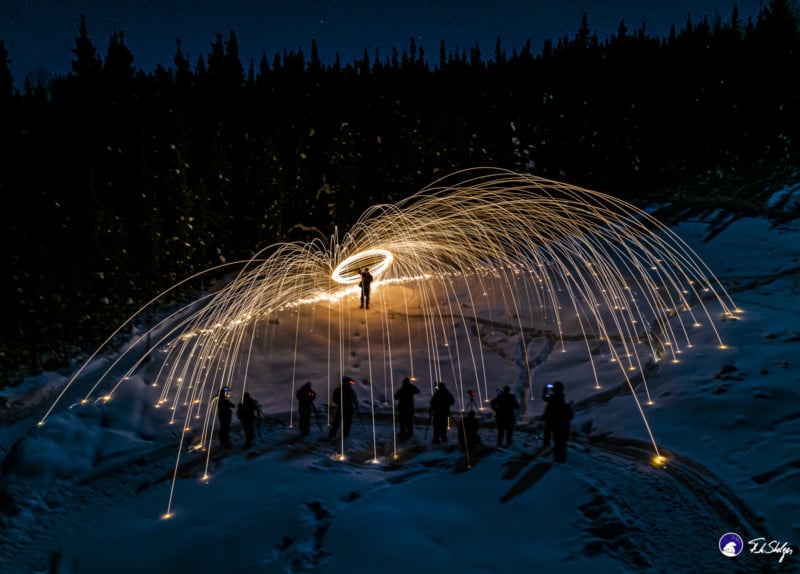 The results from above are pretty cool, if for no other reason than the fact that they capture a different perspective than we’re used to seeing when it comes to steel wool. Plus, when you’re in the middle of nowhere, in the freezing cold and surrounded by snow, you’re far less likely to do any damage or set something on fire. Win win.

A big thank you to Toby and Frank for sharking this story and images with us. To see more of Stelges’ impressive night photography or find out more about his photography school, give him a follow on Instagram or visit the Aurora Bear website.

Image credits: All photos by Frank Stelges and used with permission.

This Algorithm Can Remove the Water from Underwater Photos, and the Results are Incredible