The ocean is fascinating in every way. We know so little about its mysteries and tend to ignore its importance for all living life. What is it about the underwater world that draws people from all over the world to explore its depths? For me, the allure of marine life welcoming me into their natural habitat rather than the other way around is beautiful.

Like many before me, I’d seen numerous underwater images from photographers swimming or diving with whales. Each and every time I couldn’t help but yearn for the same experience and set the wheels in motion for 2019.

I’ve found with most unique experiences like this that there are three types of people.

The first: Oh my god, that thing is huge, why the hell would you want to do that? I’d be terrified!?

The second: Wow, that’s impressive, what beautiful creatures. I think I’ll stick to watching them from the boat.

And the third: Hell yeah! Get me in the water right now. 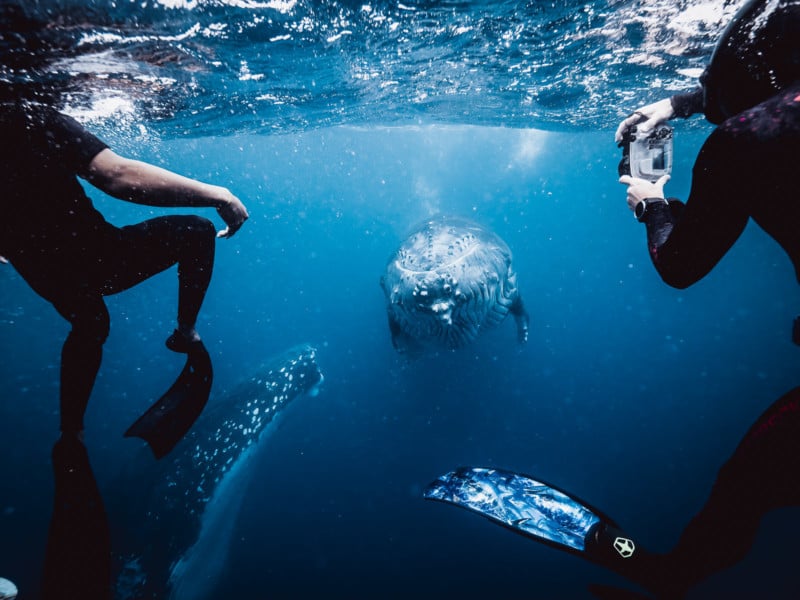 As an avid underwater photographer, freediver and animal lover, I fell into the third category along with a deep appreciation for these gentle giants. I’d had friends who went diving with the Humpbacks in Tonga and various other places around the world, and all of them returned telling tales of what a life-changing experience it was. I was sold.

Note: The legal distance of humans to a whale during an encounter is 7 meters (23ft). Many of these images were taken much closer when the whales were moving close to interact. As many of the tour operators had noted, this is often difficult to depict through photos but can clearly be seen in supporting videos. 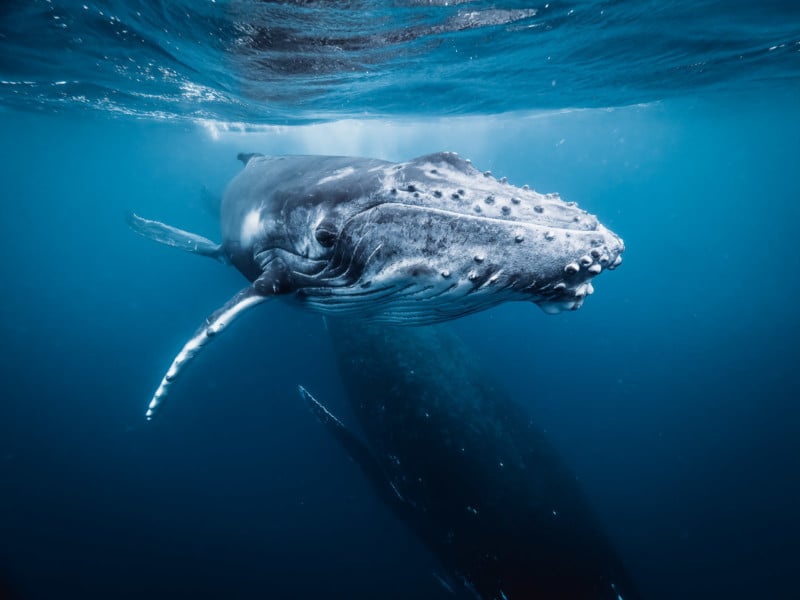 Sept 28th, we arrived in Nukualofa, the capital city of the Kingdom of Tonga situated on the main island Tongatapu. We had booked at the very end of the season but were hopeful that we would at least get a couple of great encounters over our 4-days on the water.

We specifically chose Nukualofa to escape the masses of tour operators based in Vava’u. The idea of lining up to get in the water behind 2-3 boats wasn’t my cup of tea. 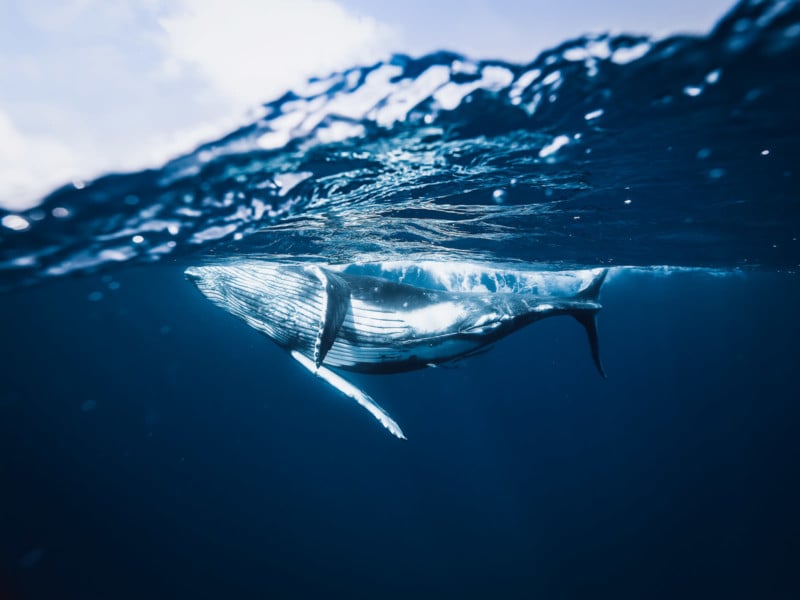 Our first day on the water started off ok with a quick swim by from a mother and her calf. This was followed by six whole hours… of nothing. We felt a little bad for the other four guests on the boat as they hadn’t even touched the water. 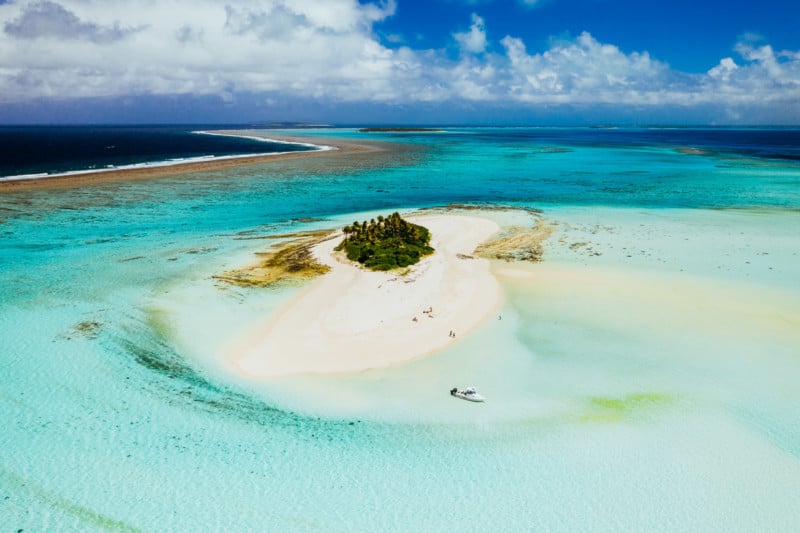 After a quick bite to eat on an incredibly picturesque deserted island, we powered off to search for more whales. We were in luck, 20-minutes before our scheduled return time we located a resting mother and her calf. The calf was tossing about at the surface before both left the scene a couple of minutes later. If this was our only interaction for the week, then it was definitely a win.

Within half an hour of leaving the Nukualofa, we were in the water and witnessing some incredible swim by moments.

I dove down to around 8m so I could capture an image at the whale’s eye level as they swam past me. Suddenly out of the corner of my eye, I could see a glimmer of white moving rapidly towards me. I turned to see this enormous male escort making an almost direct line for my location, his right pectoral fin coming straight for my head.

Midwater, I pulled back to let it slip past. Just before surfacing for air, I managed to capture this shot as he glided off into the darkness. If you look closely in the bottom right of the image, you will see my mate Brodie with his mouth wide open in awe at what he’d just seen. That afternoon we saw no other whales and called it a day with our heads held high. 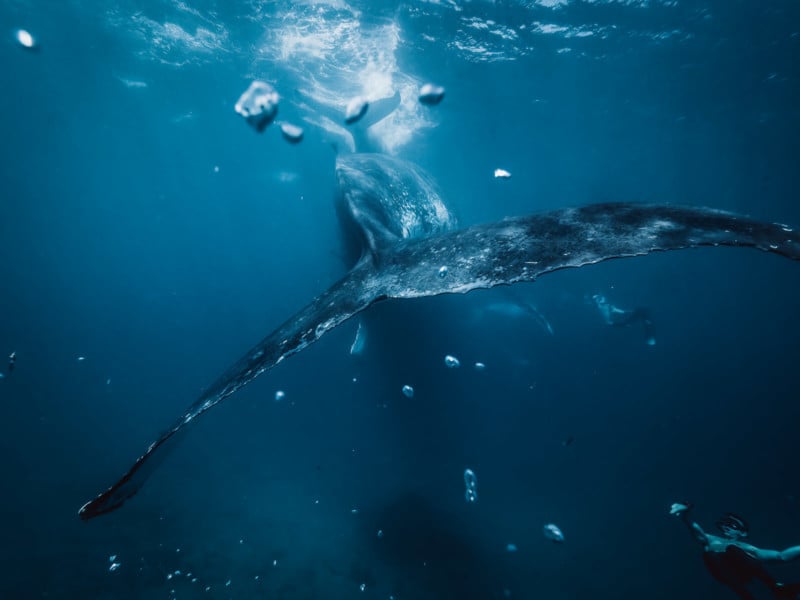 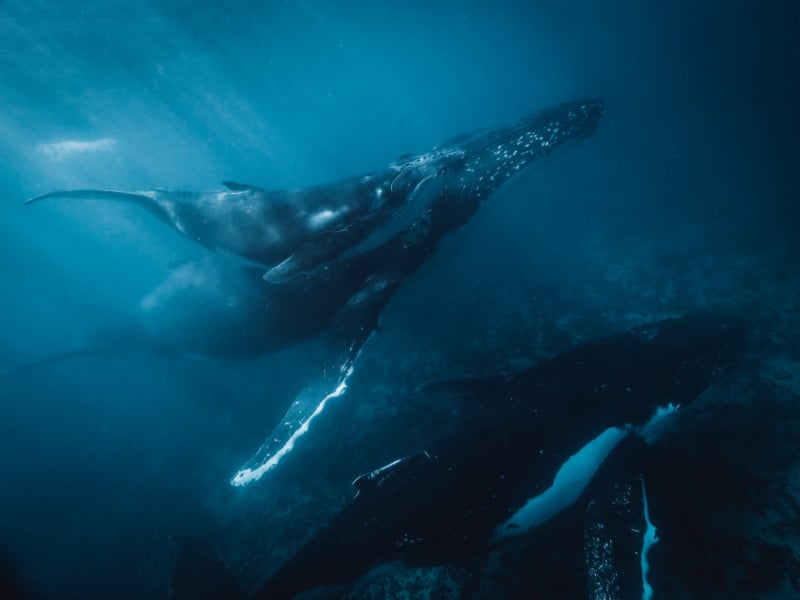 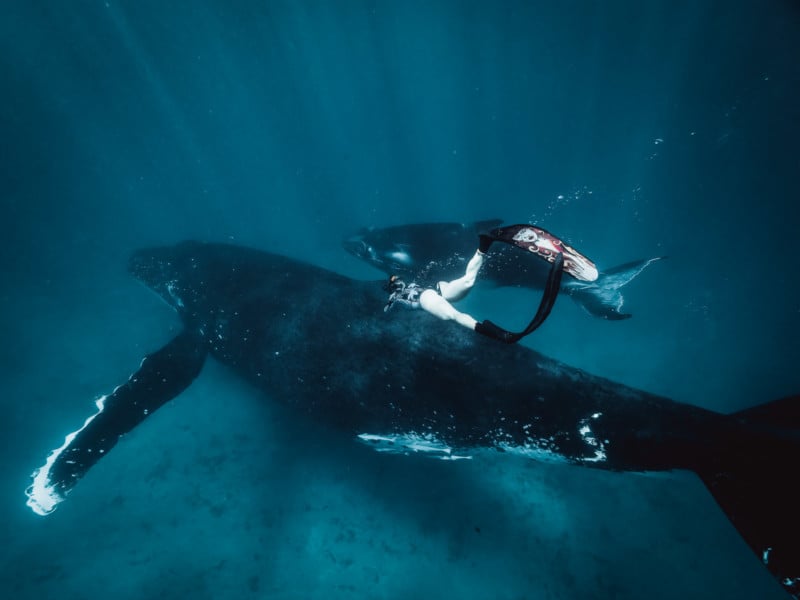 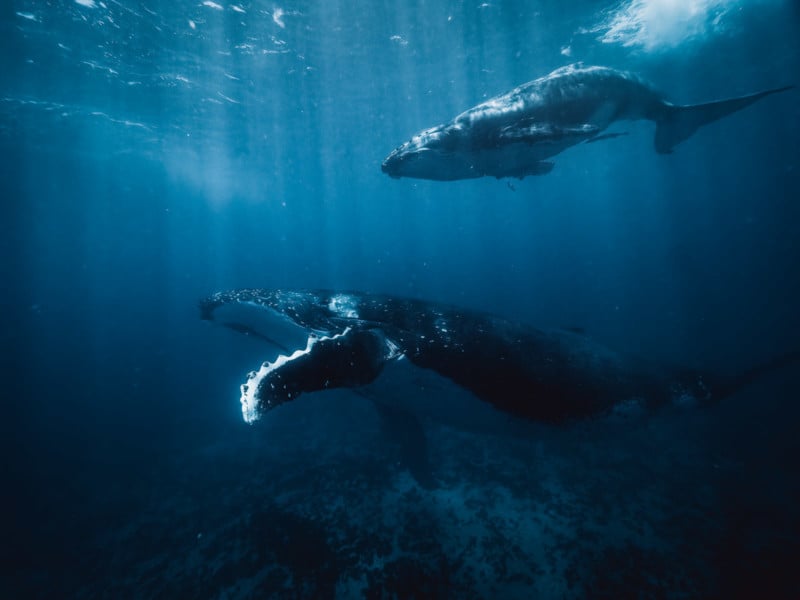 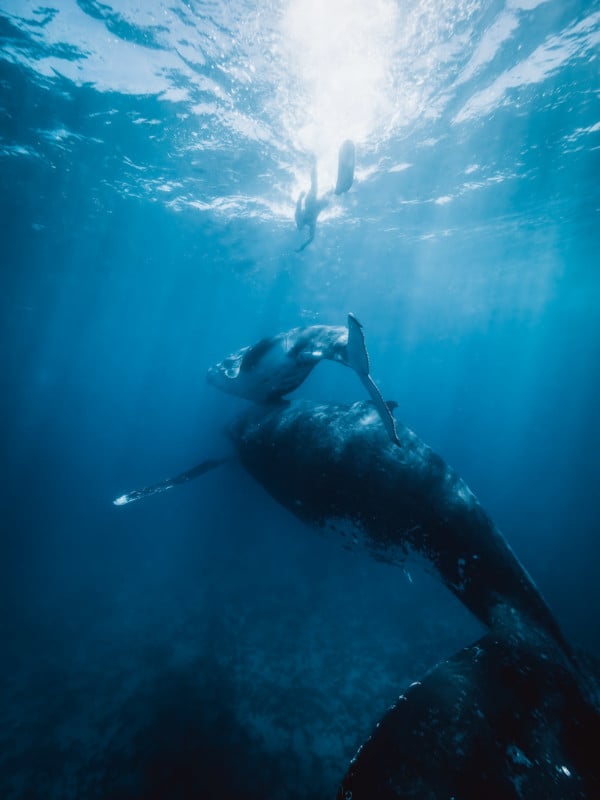 The morning started quietly with absolutely zero sightings of whales. Our skipper received word from another vessel that they had located a mother and her calf and that we should make our way over to swim once they had finished.

Boy were we in for a surprise. 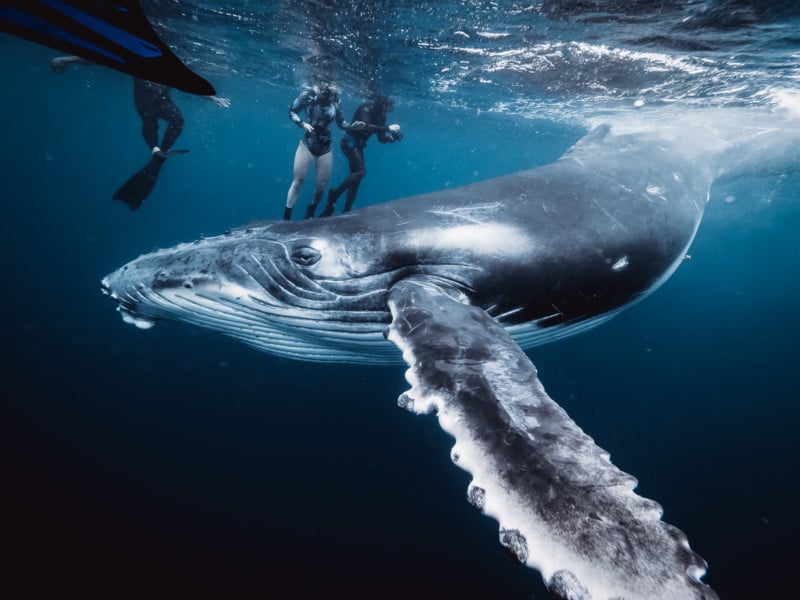 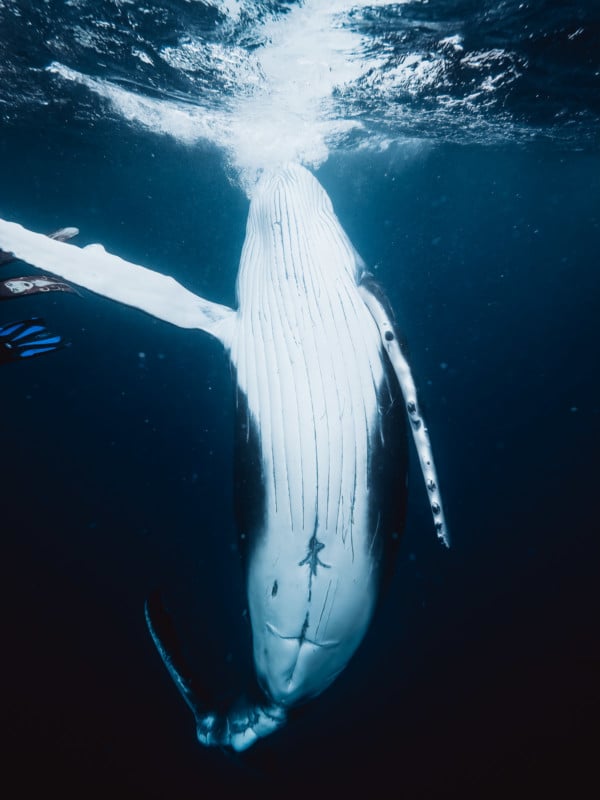 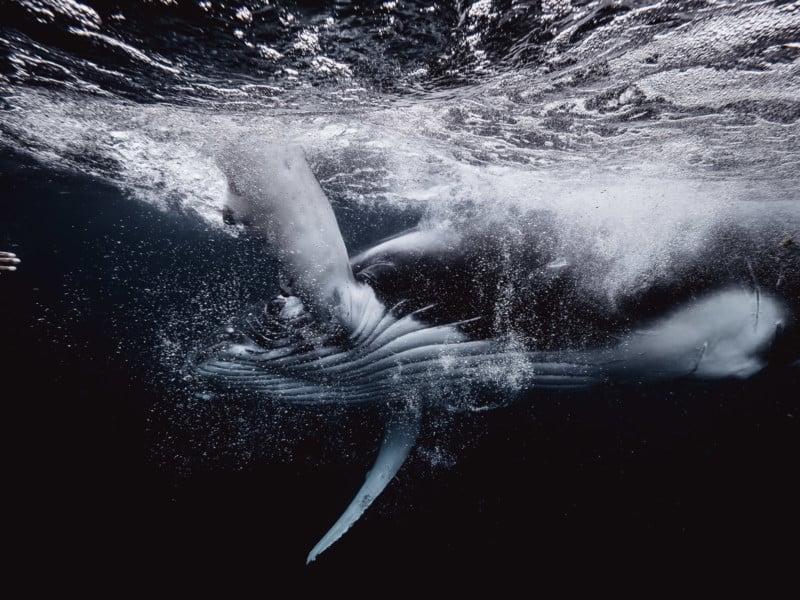 No sooner had we jumped in the water than the boisterous calf appropriately named ‘Kamikaze’ came over for a play. The inquisitive juvenile was having the time of his life spinning, splashing and motoring towards us then pulling out at the last second. 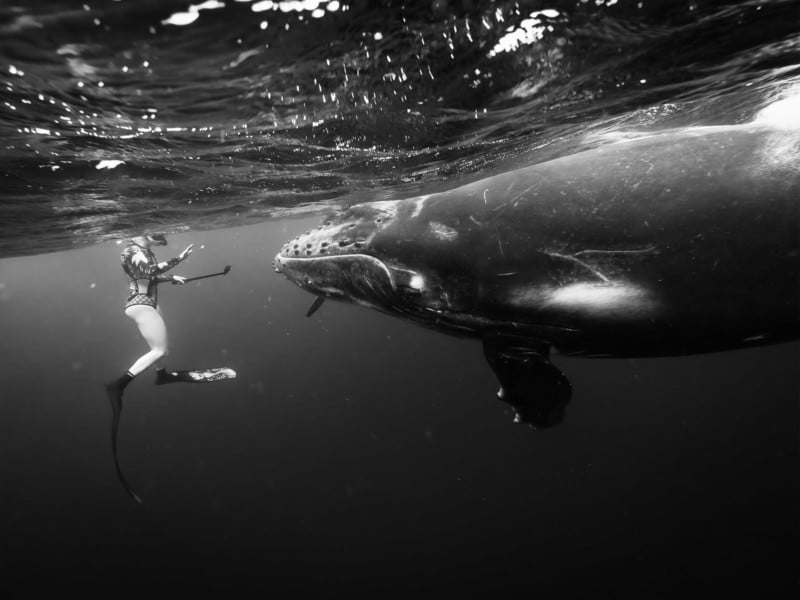 Words cannot describe the emotional connection that is immediately formed between you and the whale when you first lock eyes. Their ultimate awareness of your presence and utmost gentleness is something you must experience for yourself. 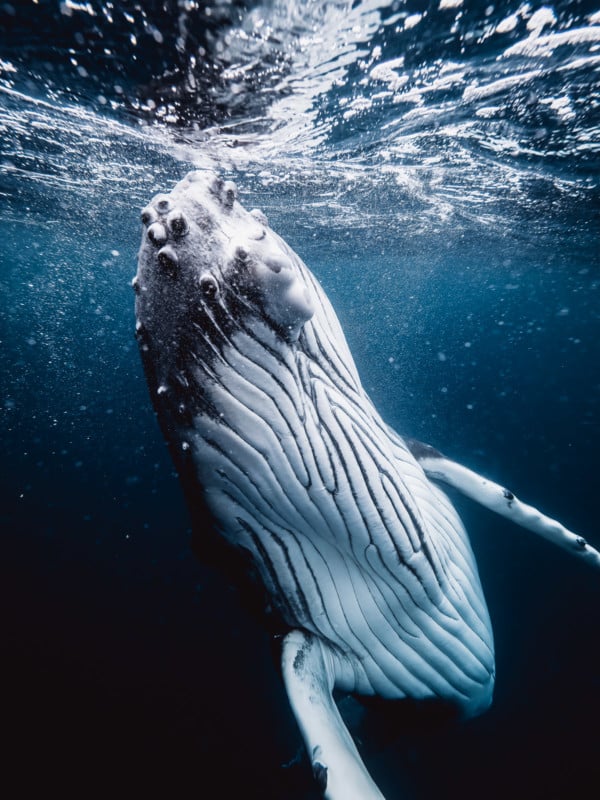 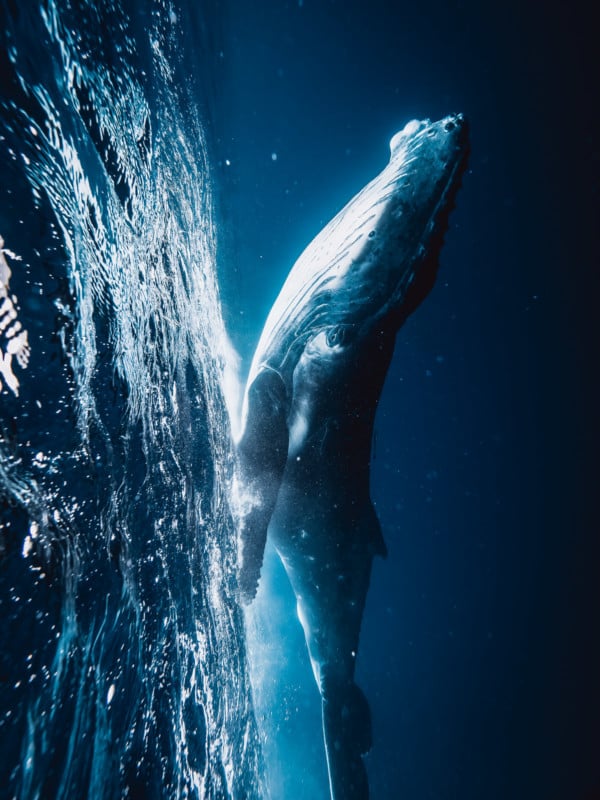 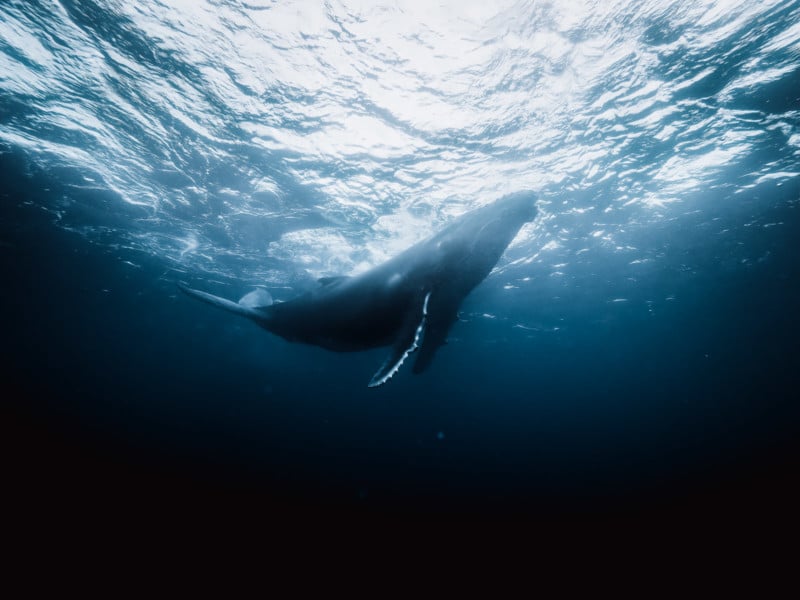 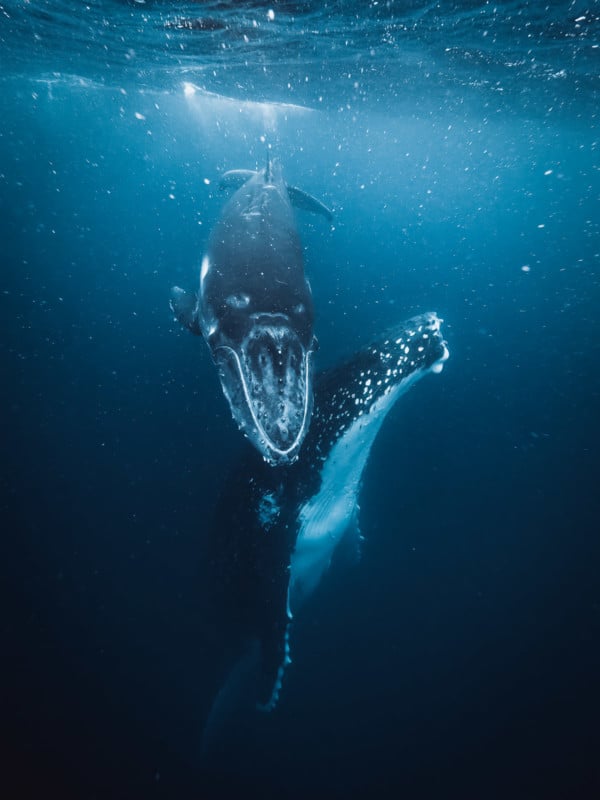 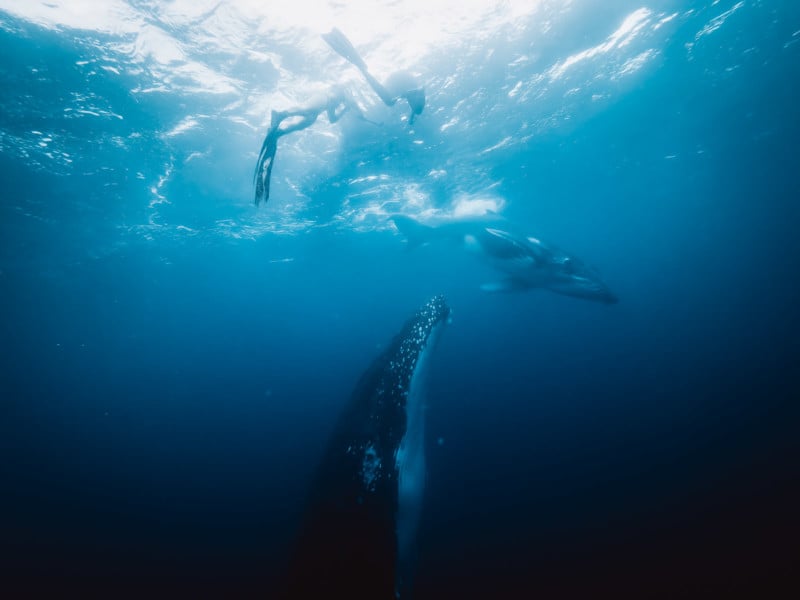 Our guide would always remind us to be aware of the mother’s presence as she rested below. 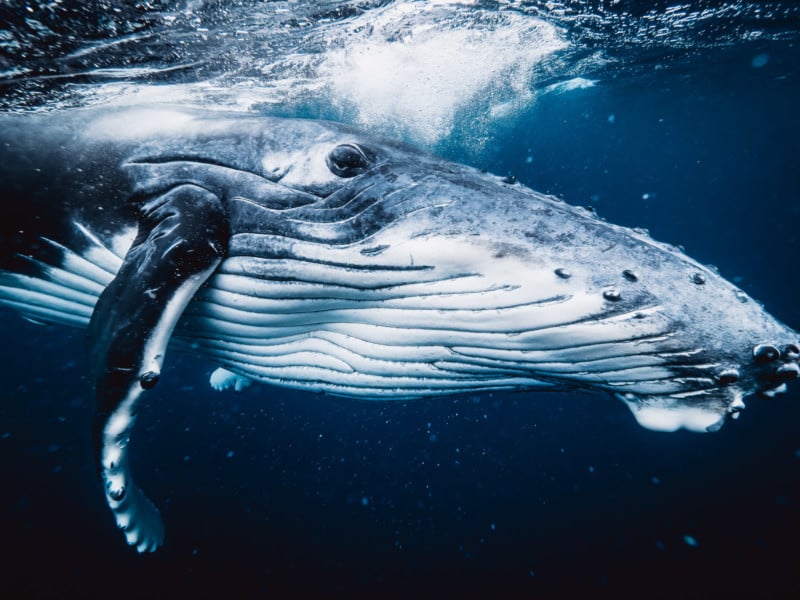 Another long day out on the water with zero sightings of whales in the morning. Come afternoon, we received radio contact from another boat that they had found a whale and her calf. 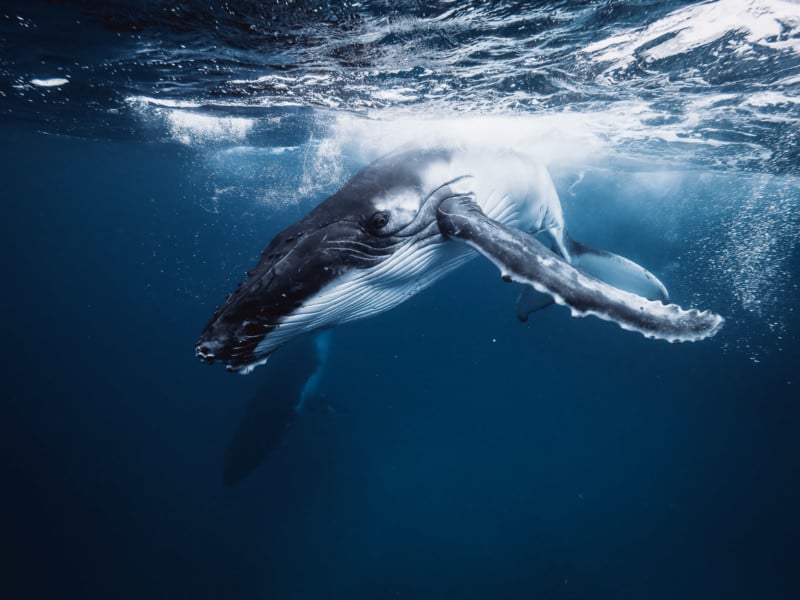 Much like yesterday, this calf was super playful. The moment he locked eyes on me, the underwater dance began. 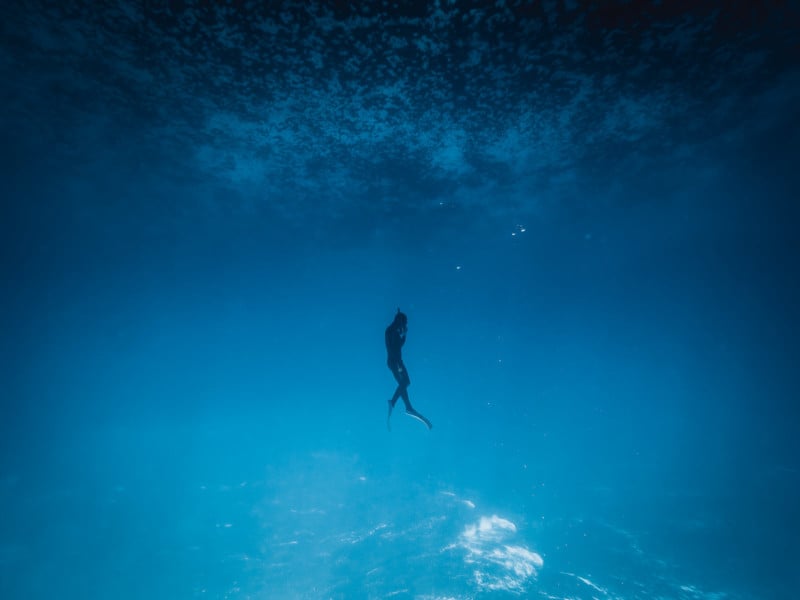 The fun was short-lived, however, as mum had decided, it was time to move on, and they disappeared off into the vast open ocean.

As the season was coming to a close, our encounters were few and far between. The waters had also warmed earlier and more significantly than usual. This resulted in the majority of the whales leaving on their journey down to Antarctica. Regardless, our experience was one to remember and, we cherished every minute we had with these incredible creatures. 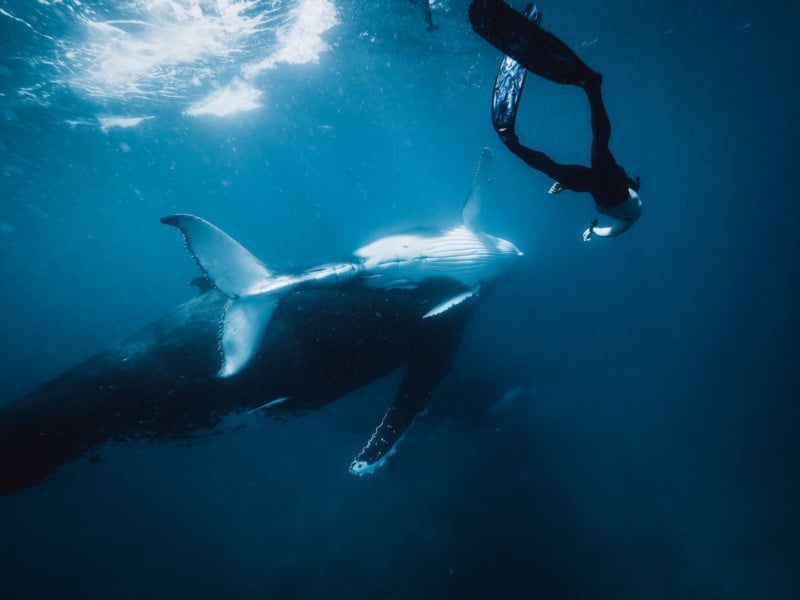 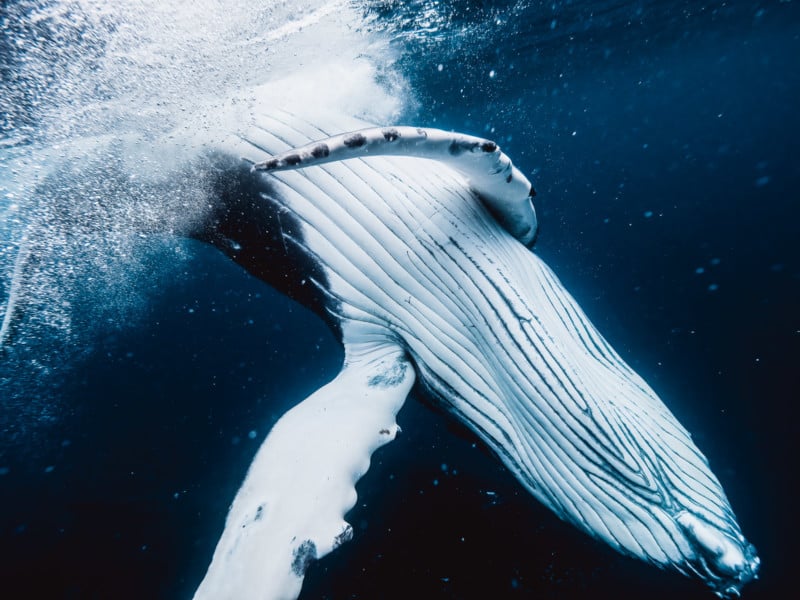 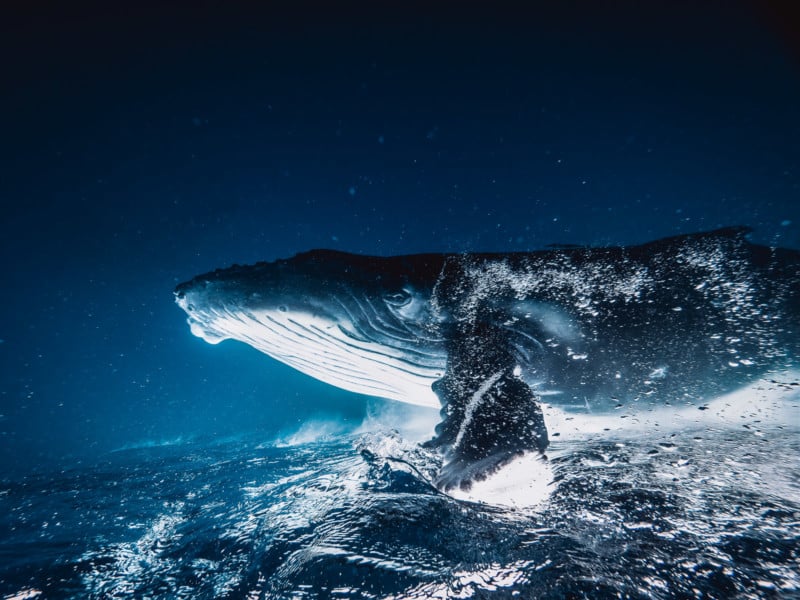 About the author: Matt Horspool is a photographer based in Sydney, Australia. The opinions expressed in this article are solely those of the author. You can find more of Horspool’s work on his website, Facebook, and Instagram. These photos were also shared here.