Recently I made my own custom-built camera rig for shooting Through-The-Viewfinder videos on a Nikon Z6 through the viewfinder of an old Lomo Lubitel 166. With my setup, I can have the whole camera in the frame but without distracting hands visible. Here’s how I did it.

Last year a friend of mine bought an old Lomo Lubitel 166 (Olympic Edition) on his trip to Ukraine. I’d seen this style of video before and loved the idea of shooting through the viewfinder of an old camera. We had done a few photography projects together before, so we decided to do something with his old camera one day. 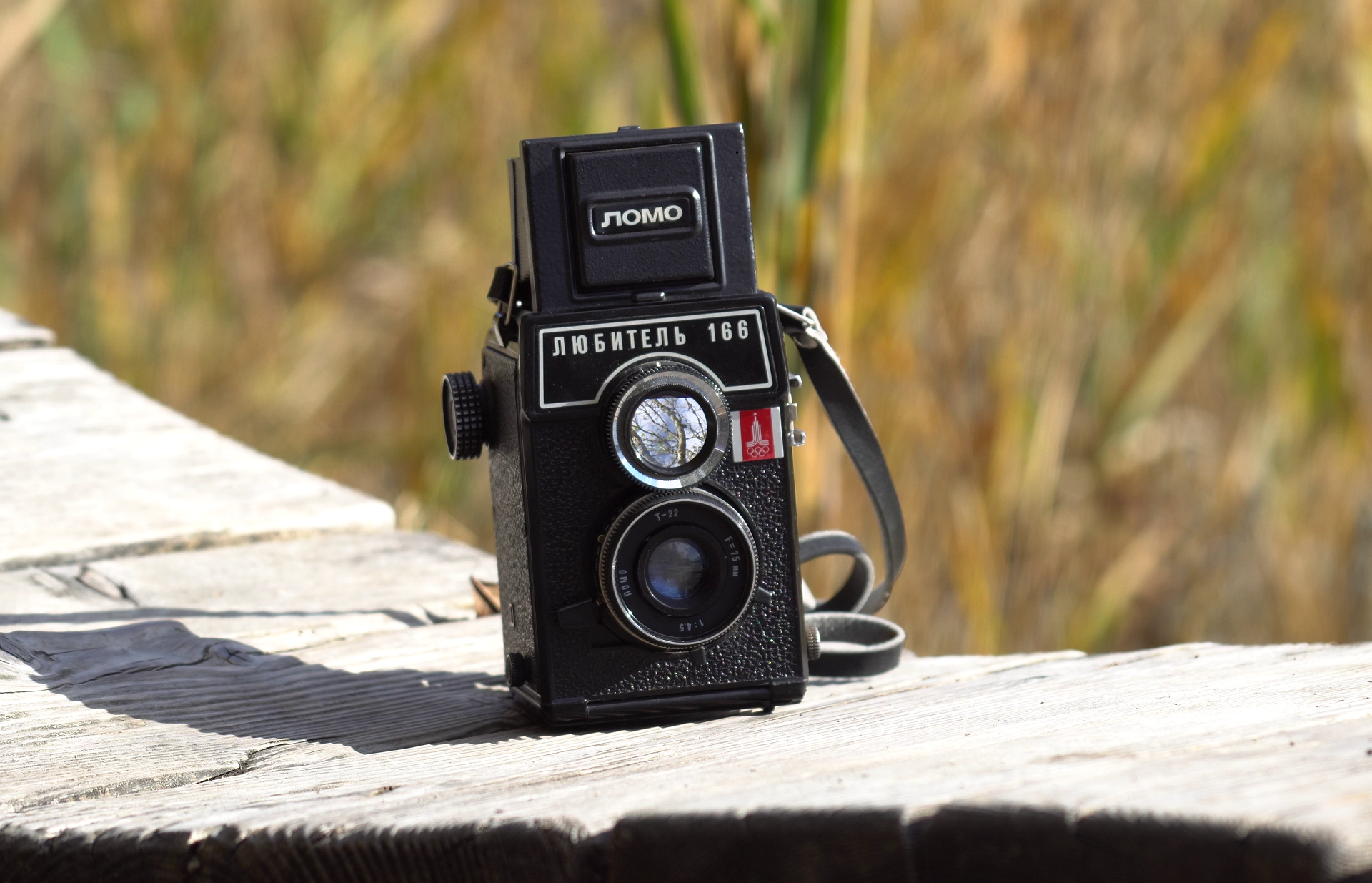 This day only came recently when we thought about what project to do next. We knew we wanted to shoot a video and have the whole camera in the frame, not only the viewfinder. But we didn’t quite like the idea of having a loose pair of hands in there the whole time. So we needed some kind of rig, because we also knew that handholding two cameras all day long was not an option.

My initial idea was to mount the cameras on my handheld stabilizer (a sort of cheap alternative to a Glidecam), but as there were so many screws that kept coming loose and no space for any attachments, I abandoned the idea rather soon. I thought, well, let’s just build something! 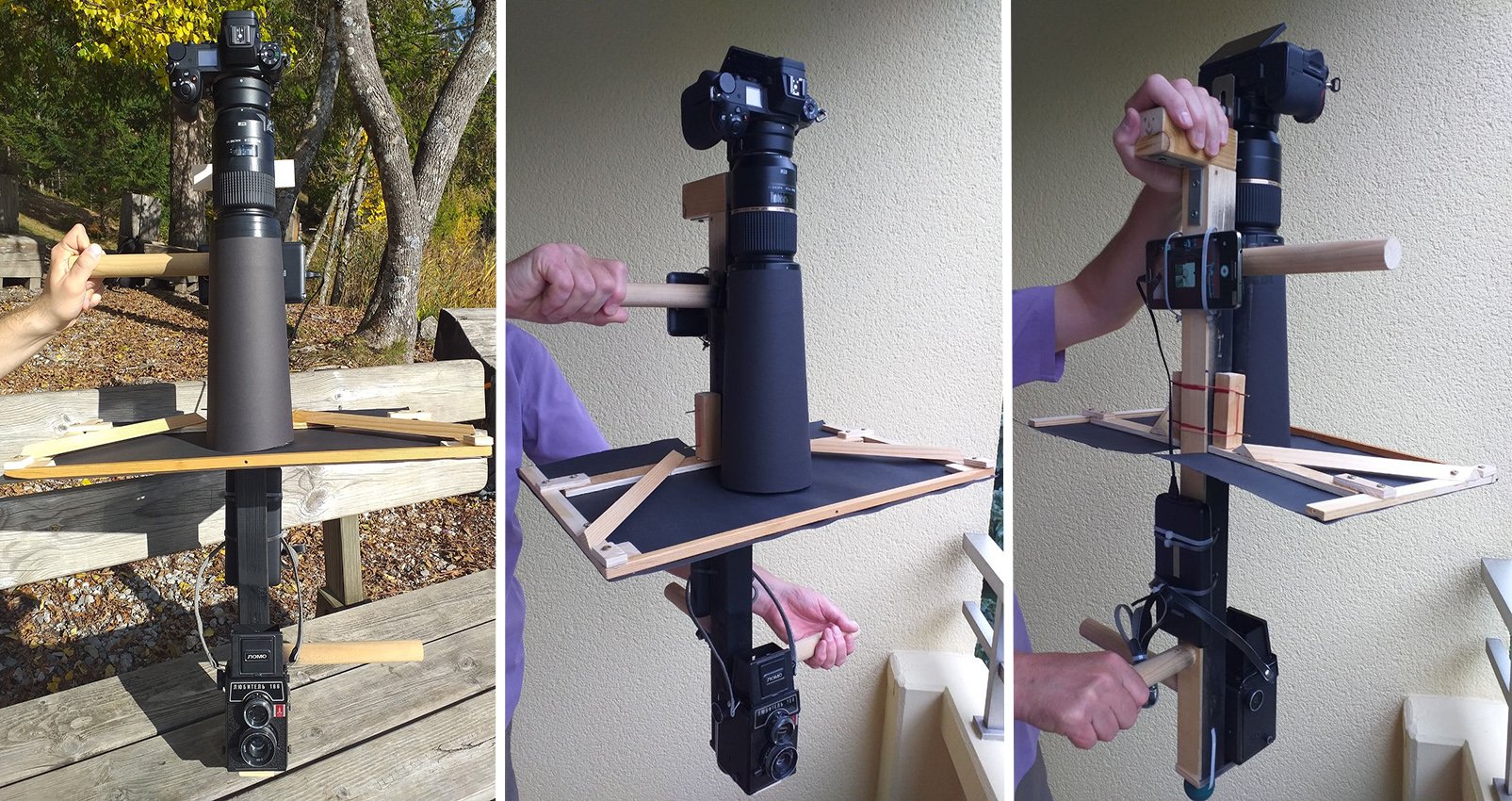 I wanted to use my Nikon Z6 to shoot in 4K, and out of all my lenses, the best option was the Tamron 90mm macro. As a macro lens it has a good close-focusing distance, and the narrow depth-of-field gave the shot a nice bit of separation from the background (i.e. the ground).

(I would have liked to use a 50 or 60mm to be able to build the rig smaller, but you work with what you’ve got, right?)

We used an 80cm square piece of wood as our main piece, attached an L-bracket that fit a standard tripod screw on the top (for the Z6), and added a small wooden board to the bottom, where we made a hole for another tripod screw (where the Lubitel is attached). 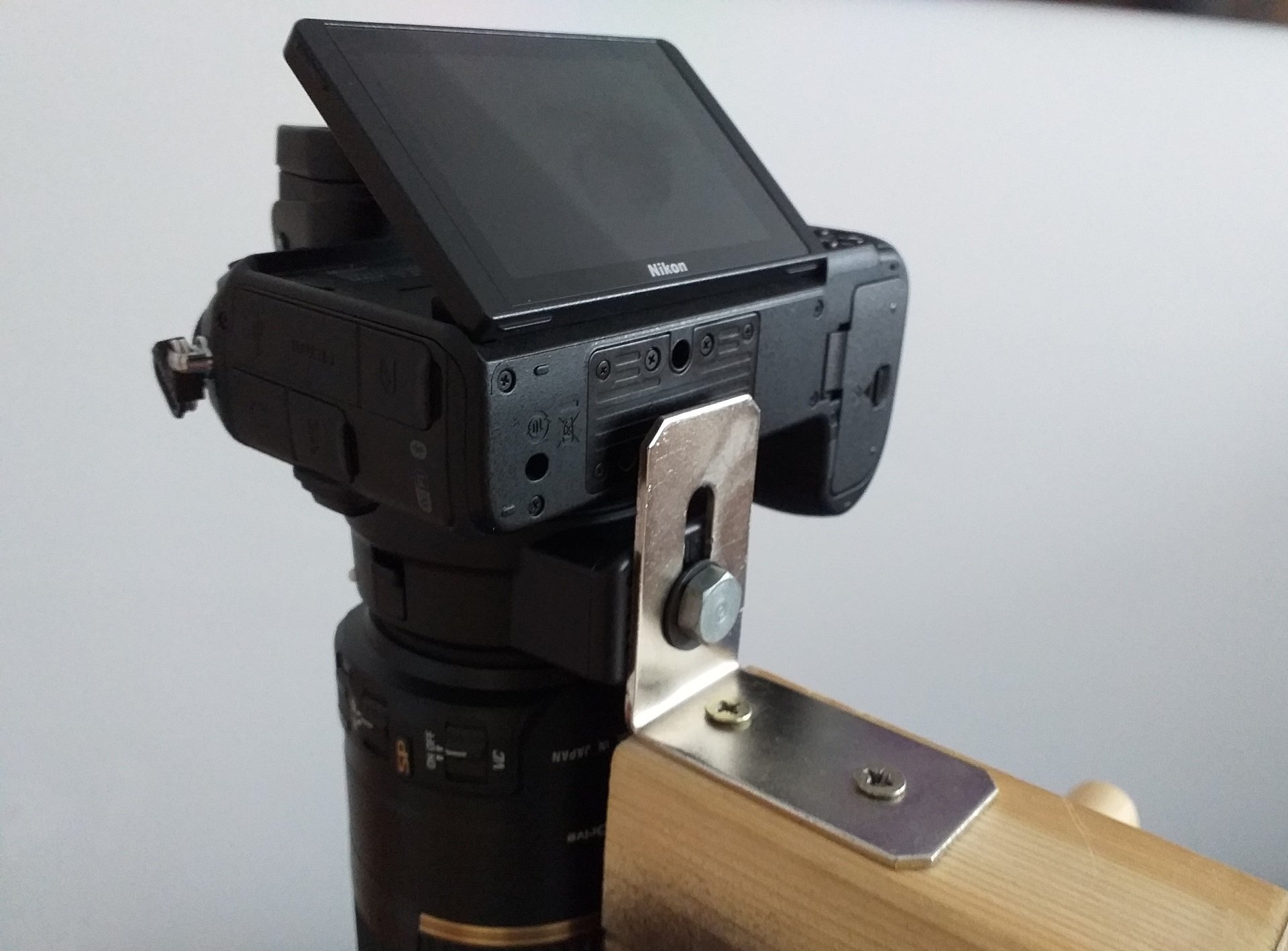 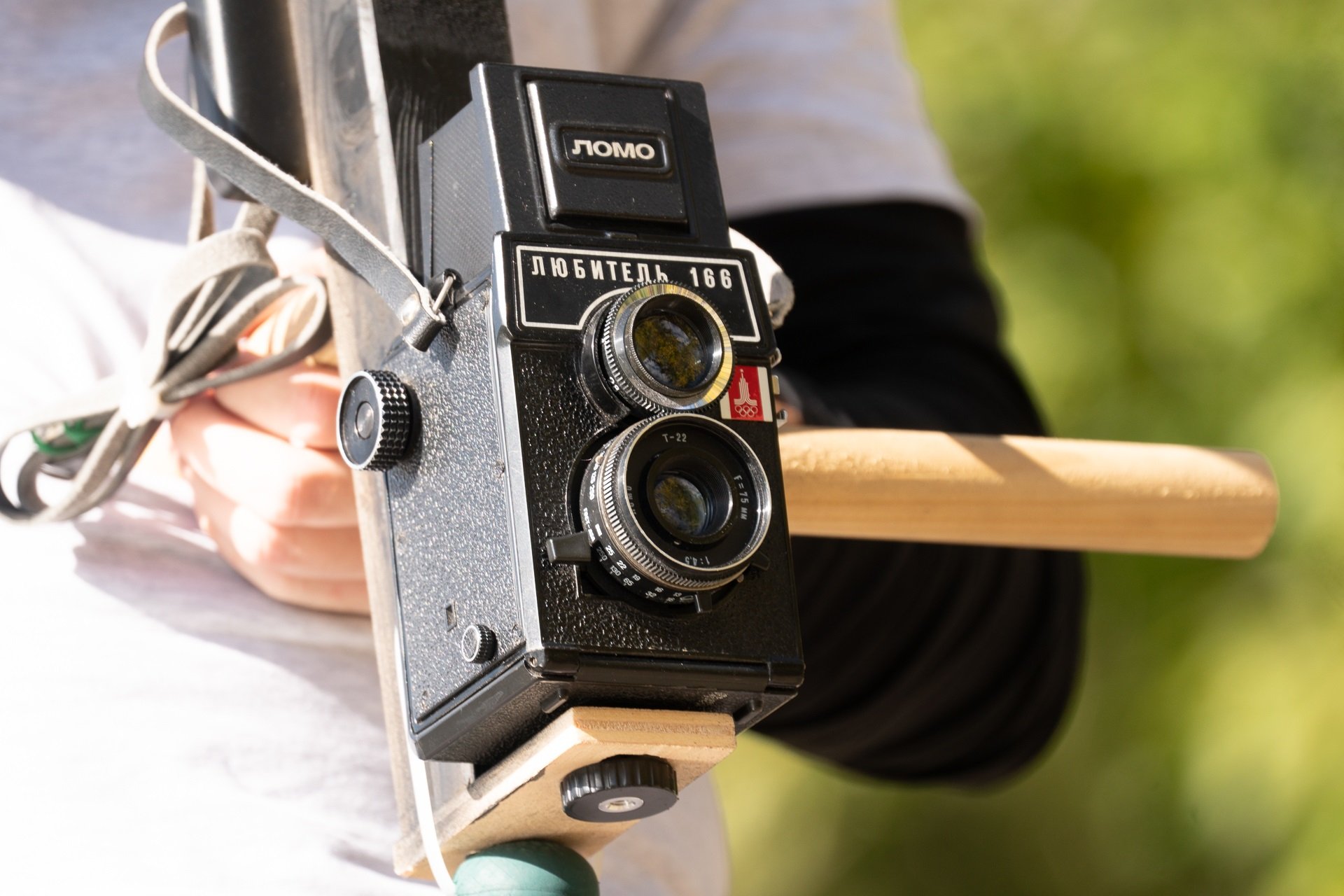 Then we needed a way to move this around easily, so we attached three grips, positioned similarly to what you might see on a farming scythe. We made the grips large enough to fit two hands, in case you need to hand it over to another person.

Our first test went okay, but we quickly realized that we were getting reflections of the sky, the Z6 and ourselves in the viewfinder of the Lubitel. Also, it was rather difficult to see the preview on the Z6’s screen, and quite dangerous to let go of the rig in order to reach the record button.

For the problem with the reflection, we built a shade out of black paper and wooden strips to keep it fairly lightweight, and made holes in the main piece where we could attach (and detach) the shade. We then added a chute to cover the hole between the lens hood and the shade, and painted parts of the main piece black. 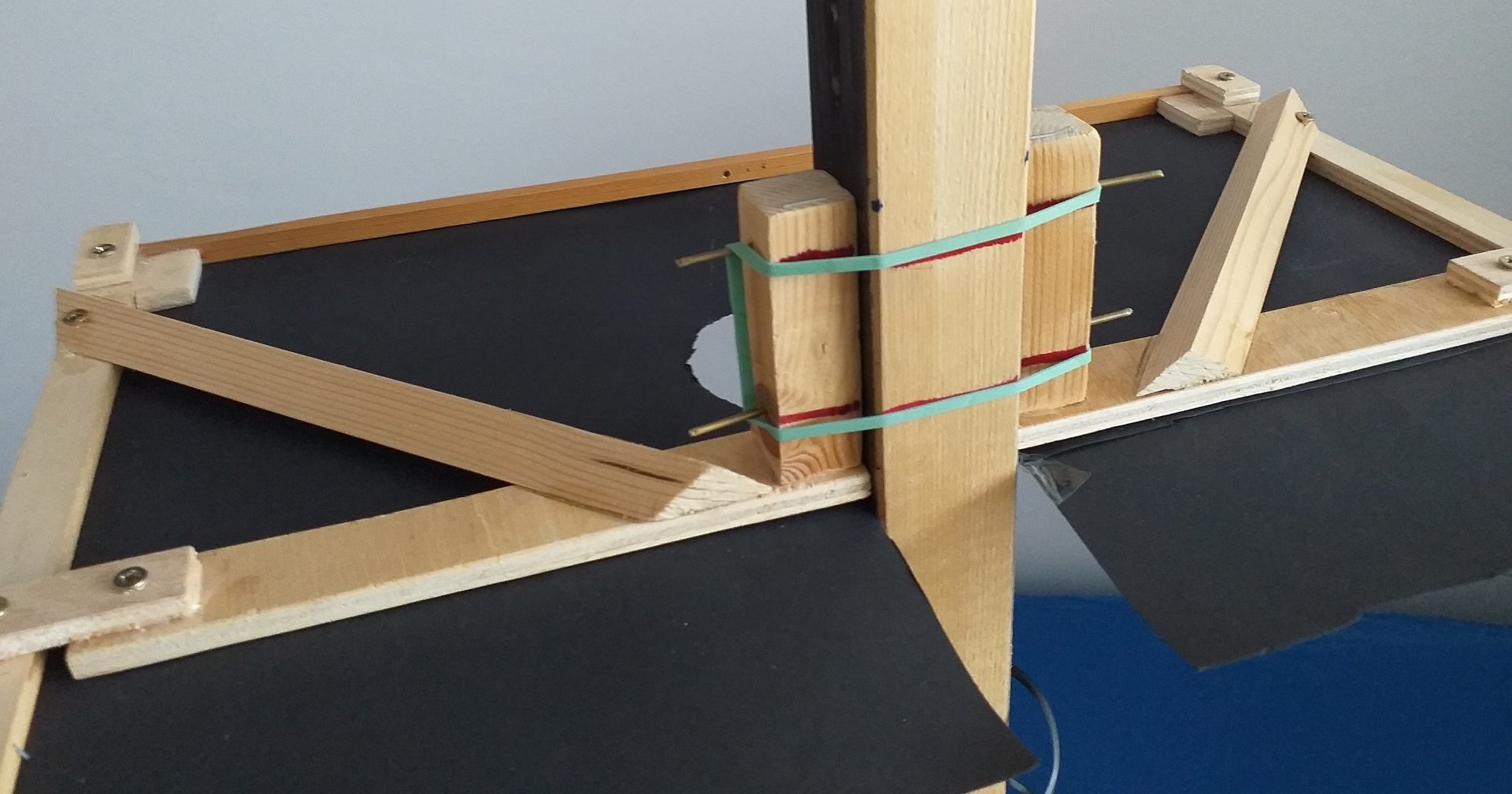 Then we added attachments for an old smartphone that used via via WiFi and the Snapbridge app to see a live preview and activate recording without needing to let go of the whole rig. (As the old phone’s battery was dying all the time, we just plugged it into a powerbank). 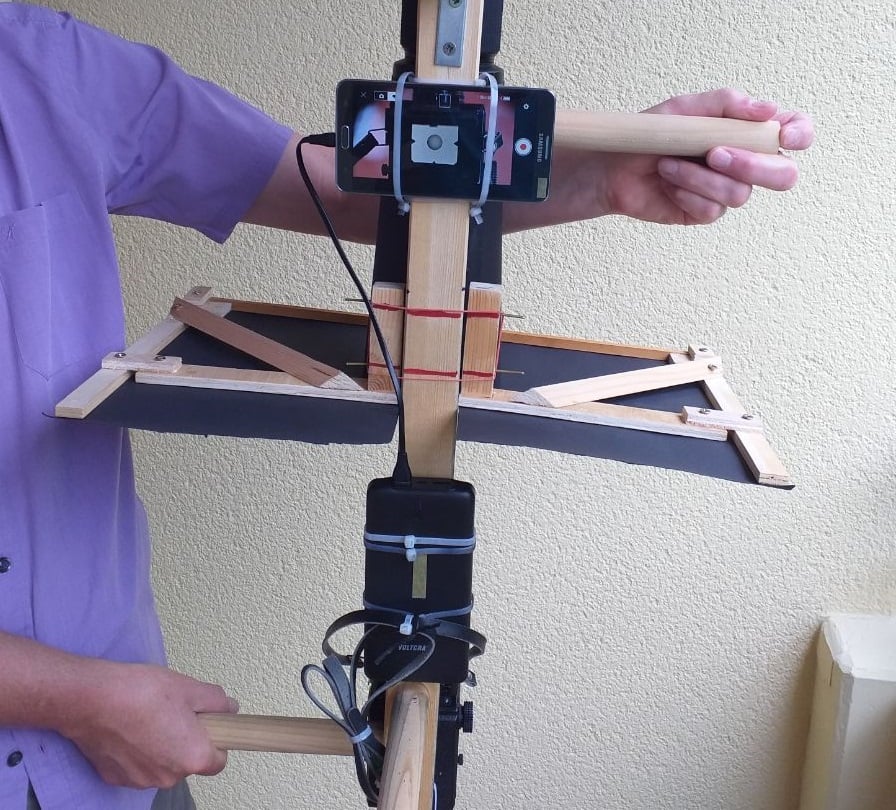 Finally, in order to cushion the whole system for those times when we would have to set it on the ground, we attached a rubber ball to the bottom. 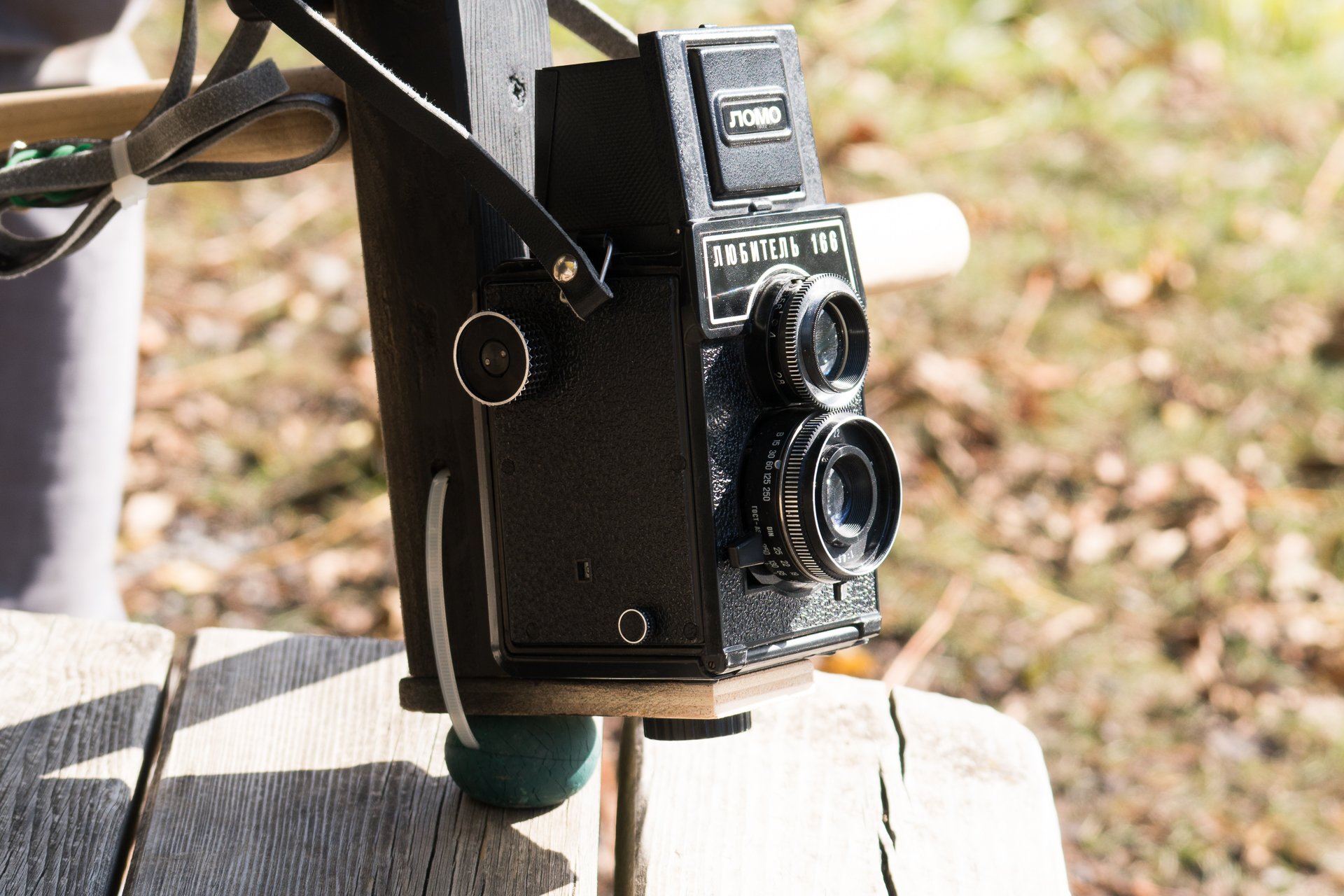 All the work was done by ourselves within two days: we cut the wood, drilled the holes, glued the pieces on and fixed them with screws if necessary. In the end, some attachments were made with good old zip ties or sticky tape.

In October, we drove to lake Weissensee in Carinthia for a day and used our rig to shoot a video of the surroundings in beautiful autumn colours.

Other than a few strange looks that we got and the fact that carrying the thing around for a whole day wore out our arms and shoulders a bit, it all went incredibly well and we are quite pleased with the final result.

In post-production we only really brightened up the darker spot in the middle of the focusing screen. A creative decision was to not flip the image horizontally, which is why the image in the viewfinder is still mirrored, the same way it would be for a photographer looking into the viewfinder. 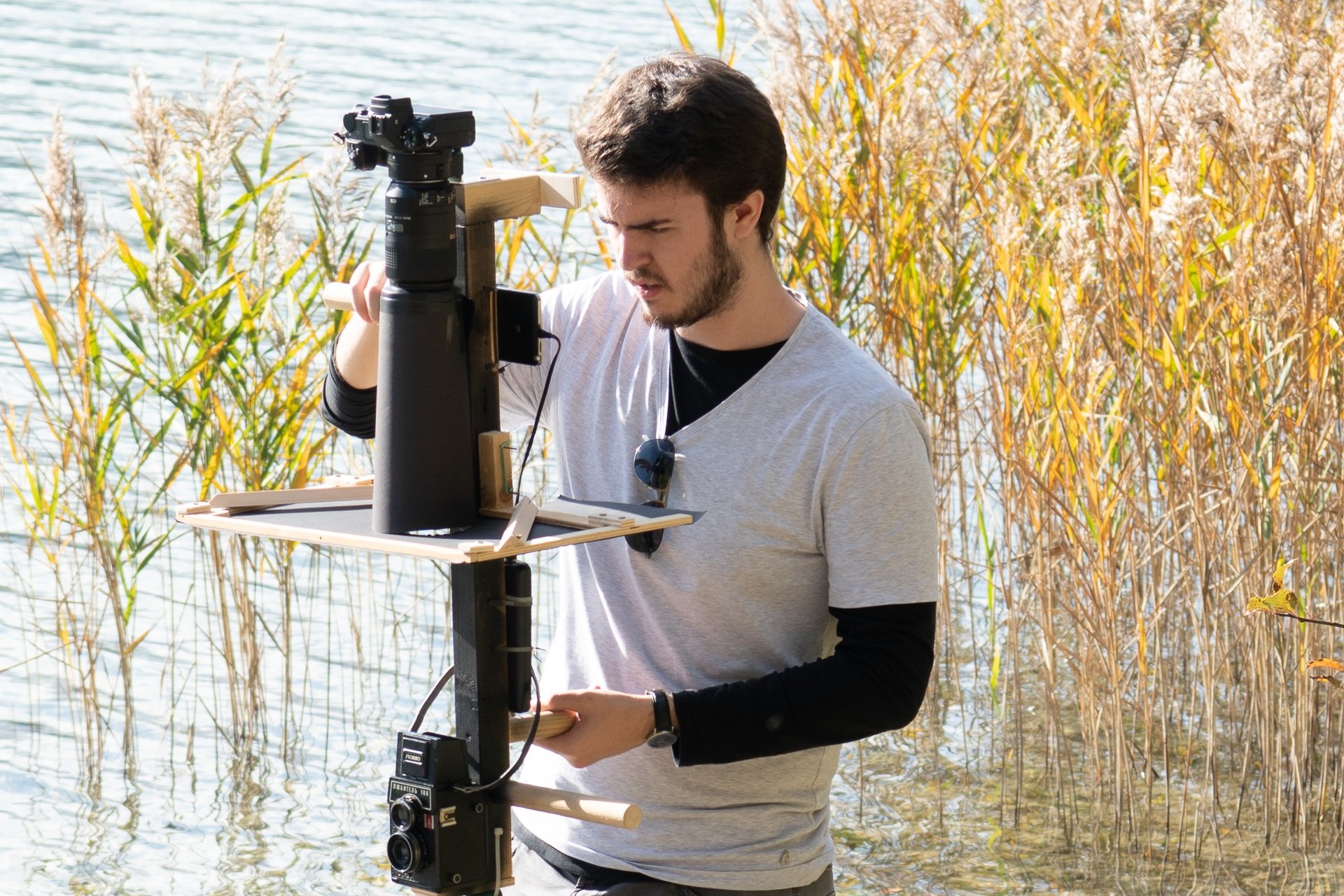 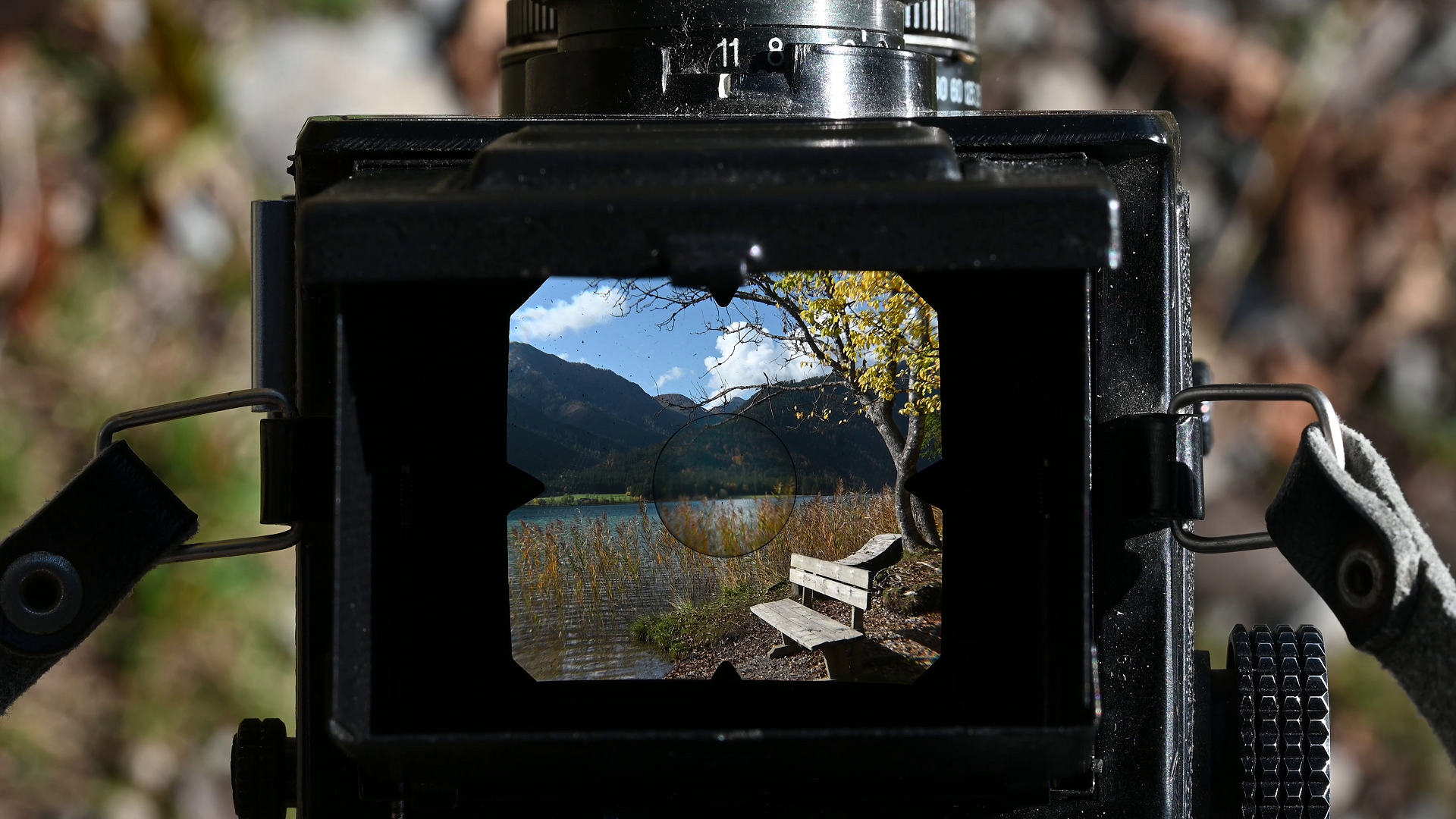 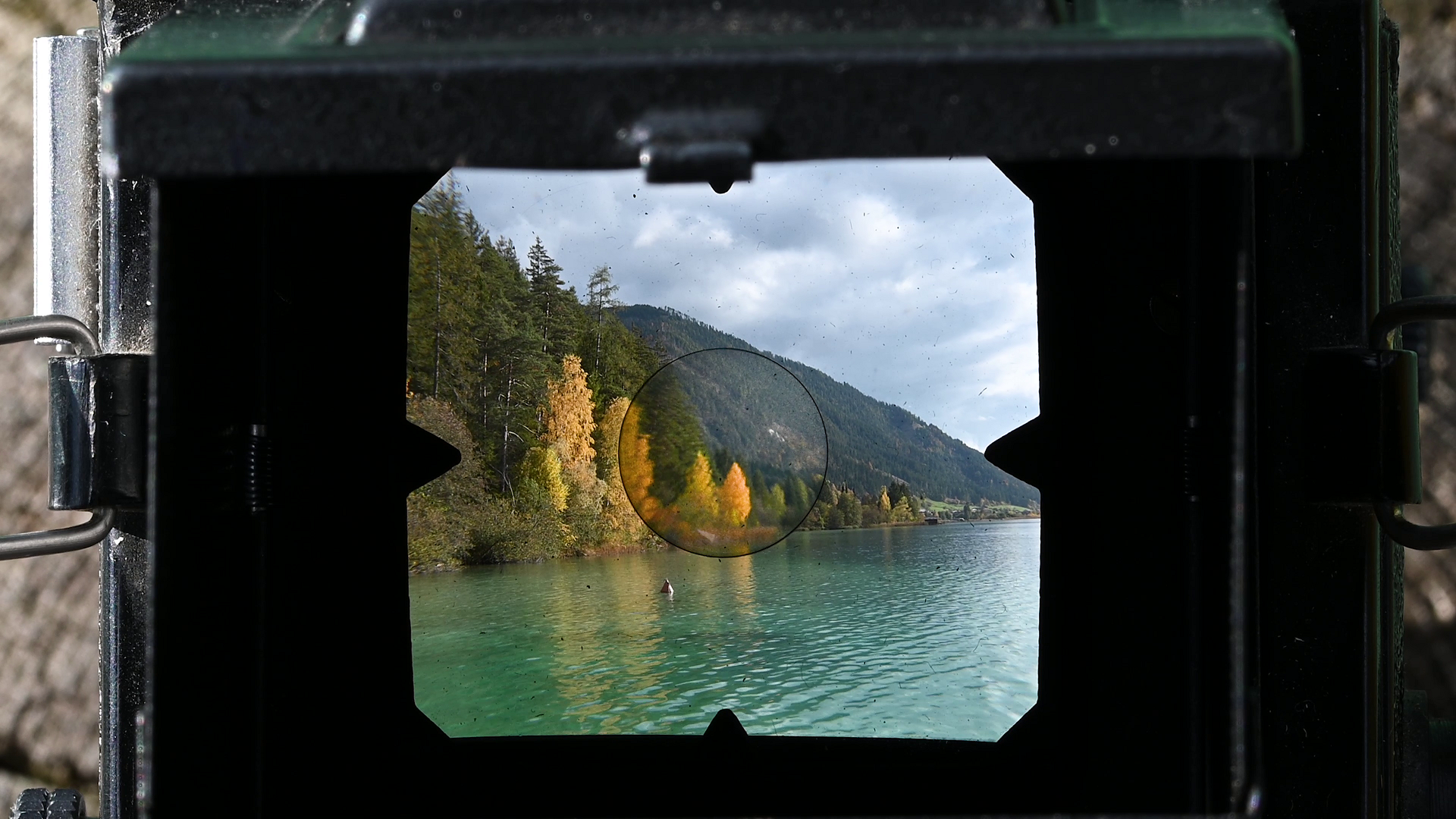 About the author: Philipp Rameder is an IT-student from Austria who enjoys photography when he’s not busy studying. His main focus is portrait photography, landscape, and timelapse, but he loves to try out new concepts and just be creative with what comes to his mind.You can find more of his work on his website, or by following him on Instagram, Facebook, and YouTube.

How to Build a Low Budget Photography Set