If you thought the Leica M Monochrom cameras were a gimmick that had already enjoyed their moment in the sun, it looks like you were wrong. According to the latest reports, the iconic German camera maker is working on a new Monochrom camera with a 41MP sensor and a design similar to the current Leica M10.

Earlier today, Leica Rumors received a screenshot of EXIF data “confirming” the existence of a Leica M10 Monochrom with a 41MP images sensor (7864 x 5200 pixels to be exact), which LR says “is already being tested in the field.” According to the rumor site, the camera will be officially announced sometime in 2020.

You can see the leaked EXIF data below: 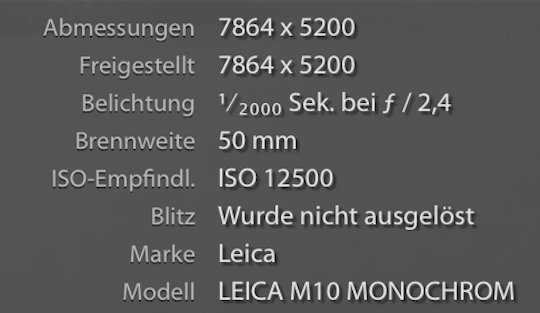 The Leica M Monochrom lineup has been a bit divisive—it’s just as expensive as any of Leica’s digital M-series cameras, yet it can only shoot black-and-white images. But while other “gimmicky” cameras from Leica—like the LCD-less Leica M-D—continue to be the subject of occasional scorn and mockery, the Monochrom enjoys something of a cult following of people who are willing to spend serious cash. After all, there are some real advantages to removing the Bayer filter.

Knowing this, it’s not surprising to hear that Leica will be refreshing the Monochrom once more—even if most of us won’t be able to afford it.

For now the official release is at least a few months out, but keep an eye out for more leaks and information in the meantime. And if you love (or hate) the current Leica M Monochrom, let us know why in the comments.

How to Do Water Ripple Tank Shadow Photography