Adobe generated considerable hype when it teased “full” Photoshop for iPad last year. The app officially launched to the public this week, and it hasn’t exactly lived up to the hype. In fact, it’s been quite the opposite: early reviews from users have been terrible.

Over in the Apple App Store, where it’s presented as an “Editors’ Choice”, the app currently has 2.1 out of 5 stars after nearly 600 ratings by users. And alongside the Editors’ Choice badge, the two reviews featured on the desktop page give the app 2/5 stars and 1/5 stars, respectively. 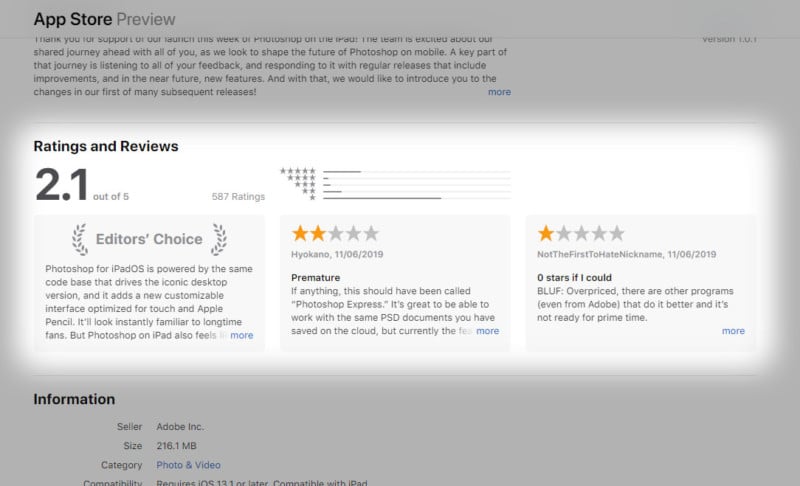 “If anything, this should have been called “Photoshop Express,” writes the first reviewer. “It’s great to be able to work with the same PSD documents you have saved on the cloud, but currently the features are too severely limited.”

The fact that many key desktop features were missing in the iPad app is something early beta testers sounded the alarm about a couple of weeks before Adobe’s official launch.

The second featured review in the app store is even more scathing: 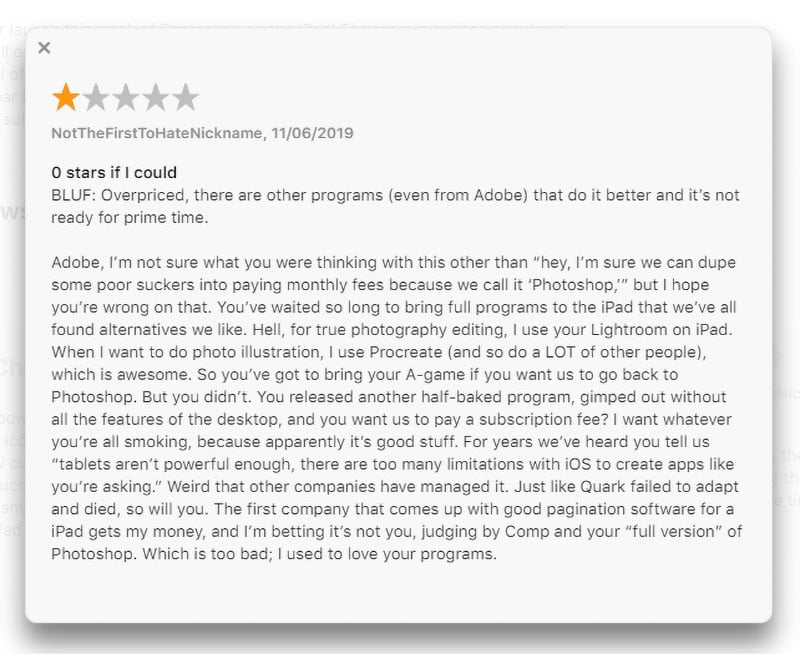 Twitter is also filled with early adopters slamming the app. Some complaints are about the app’s speed (or lack thereof):

My review of Photoshop for iPad pic.twitter.com/ujlIbj2a6f

Some are reporting crashes:

Photoshop on iPad is out pic.twitter.com/GmxZJvDwuM

Some are complaints about the app not understanding certain groups of users (e.g. artists) and having poor UI:

I’ll admit I was a little worried that Photoshop for the iPad would take a chunk out of Procreate’s user base but discovering that my hunch was right that Adobe would boof the whole thing is both comforting and frustrating. They have no understanding of their artist users at all.

here’s my feedback on photoshop for ipad! mine didn’t need to lag to be horrific. pic.twitter.com/YzM5prdDIV

A general sentiment seems to be that, given how many formidable competing apps are already available, Adobe should have waited to release an actually “full” version of Photoshop with the same tools and features as the desktop app rather than first push out a stripped-down app with a minimal subset of tools.

In an interview with PetaPixel, Adobe Creative Cloud Chief Product Officer Scott Belsky argued for an incremental release of features over time. Internally, the company believed that releasing “full” Photoshop from the get-go would have been a bad idea.

“Thirty years of features dropped on our customers on day one is a recipe for failure,” Belsky said. “[…] We spend a lot of time getting those foundations right.

“Now, did we ship every every single feature that will ever come onto that foundation on day one? No, I mean we couldn’t and it would take years to do so. But the foundation is there. So the sky is the limit on the modern Photoshop. You can built it into anything because it is the code base that has evolved over thirty years to enable anything.”

Beklsy has also taken to Twitter for damage control in response to the early flood of negative reviews.

a real-time v1 lesson: you’ve gotta ship an MVP to start the journey, but it will be painful at first. by definition, it won’t please everyone (and if it’s a reimagination of a 30yr old popular/global product, will displease many) pic.twitter.com/LaJ6oJlwcD

if you try to make everybody happy w/ a v1, you’ll either never ship or make nobody happy. such feats require customer feedback to truly exceed expectations. you must ship and get fellow passionate travelers on board.

but for a team with the right vision and commitment, being doubted and critiqued is motivating and informing.

as hard as it is, at some point you need to build a new product WITH customers – out in the world, not just FOR customers – hidden in the lab.

in the case of photoshop on ipad v1, it was the team’s judgment to nail perfect PSD support, a few workflows and rethink features / UI, and NOT just port 30 yrs of stuff (and baggage) on day 1. and it’s our burden to prove the value and exceed expectations.

excited to RT this someday soon with a different pic, as the Photoshop team ships the amazing roadmap of features ahead, w/ our customers’ input. heads down and off to the races…

“You’ve gotta ship [a minimum viable product] to start the journey, but it will be painful at first,” Belsky writes. “By definition, it won’t please everyone (and if it’s a reimagination of a 30yr old popular/global product, will displease many)

“[…] If you try to make everybody happy w/ a v1, you’ll either never ship or make nobody happy.”

Adobe did ship, and now it remains to be seen whether it’s customers will be loyal, patient, and “passionate” enough to get “on board” and travel the journey with Adobe as it works toward actually bringing full-fledged desktop Photoshop to the tablet.

Thoughts on the Nikon Z6 II for Wildlife Photography