French action sports photographer Hadrien Picard recently got in touch to share an old project he thought we might enjoy. We’ll call it: life before there was GoPro—and it’s the story of how Picard shot some unique (back then) BMX trick photos using a helmet-mounted DSLR.

Picard stumbled across this old project the other day, while digging through some old hard drives. While looking through some shoots from 2006, he found a few photos he’d shot of his friend and talented BMX rider Romuald Noirot (AKA Bibi) with a Nikon D70 literally taped to the top of his helmet: 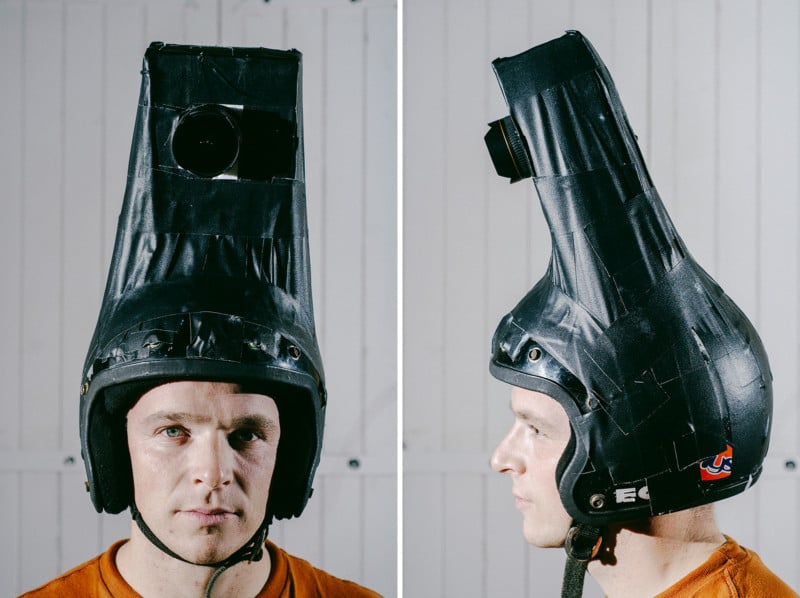 This immediately brought back a flood of memories.

“It was in 2006, and I really wanted to capture a photo that showed what the rider sees while doing a trick… and I wanted to do it at night, because it would look way more cool!” Picard recalls. “At that time, GoPro was at its beginning—I don’t even remember if the brand was already available in France or not. I checked Wikipedia and it looks like the Digital HERO from 2006 was a 640×460 camera… would be hard to print a full page with that!”

So, since GoPro was out, Picard did the only other thing he could possibly think of.

“The only solution would be to put a real DSLR on the head of the rider… and that’s exactly what we did,” he laughs, recalling the very ‘janky’ setup they came up with. “As you can see from the BTS pics (below), we put a Nikon D70 with the 10.5mm fisheye on a poly box, then taped it onto an open-face BMX helmet using a LOT of gaff tape.” 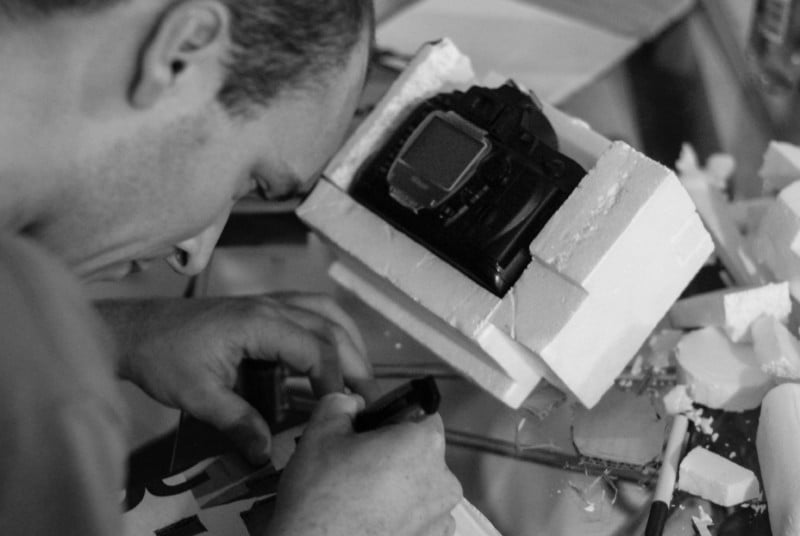 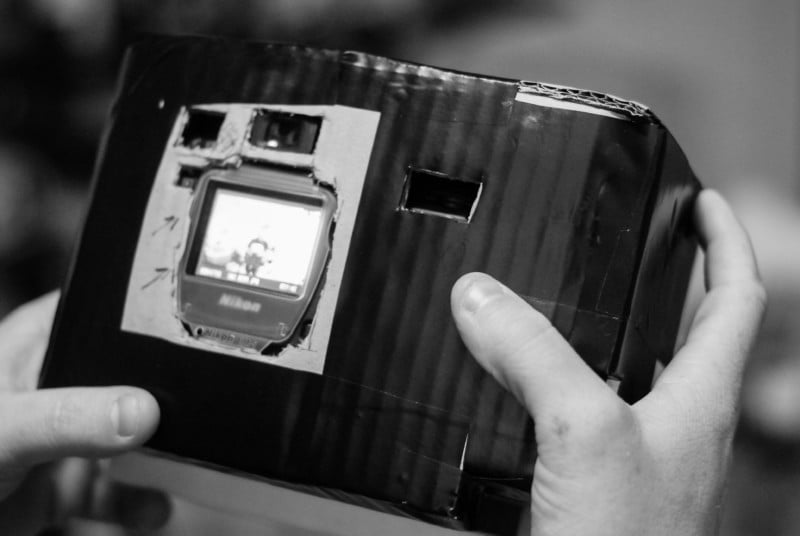 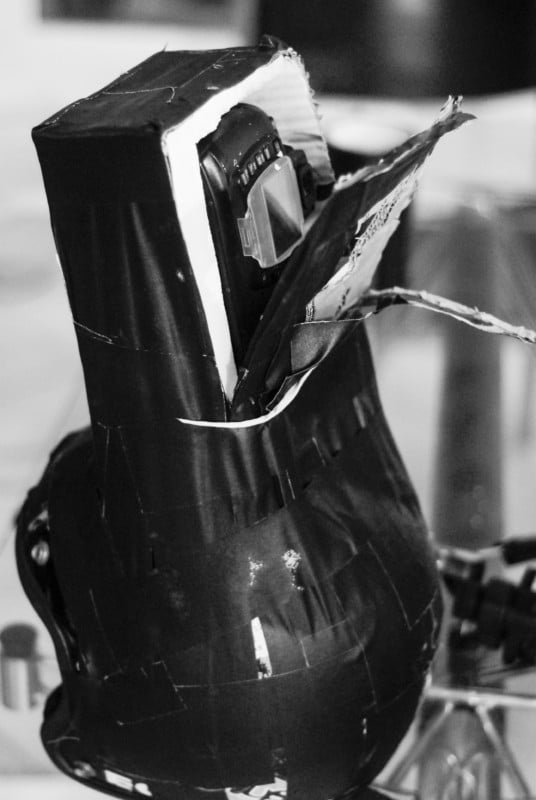 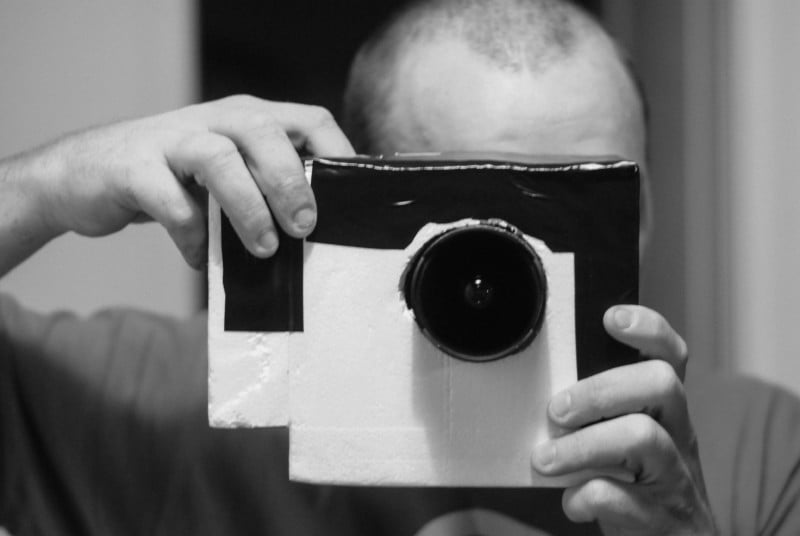 One problem, recalls Picard, is that the helmet was now both huge and heavy, but Bibi took to it without an issue. All that was left was to actually go out and try to get a photo using the helmet mounted camera.

“So here we were, at 11pm, in the South of France, in the backyard of Bibi, Alex Dropsy & Guilbert’s home, trying to make a photo of a rider with what looked like a PC tower on his head,” he tells PetaPixel. “The jumps were lit, but not enough for the photo so we had to use some flashes. I used four Nikon SB25s or 24s for that.”

“I know I should have used more powerful flashes and higher stands, but that’s all I had at this time,” continues Picard. “You can indeed tell the SBs were at full power since the back wheel is not perfectly frozen by the flash.”

The other major problem was timing: how to trigger the flashes and the D70 at the same time.

Instead, he decided to shoot a long exposure, and trigger the flashes himself.

“We needed a couple of tries to get the timing correct. It took 7 seconds for Bibi to hit the jump if he started from a stand still. So someone would start the 10 seconds timer, and I would ask Bibi to wait 4 seconds before going for it,” says Picard. “I set up a 4-second long exposure, so I knew the photo would start to be taken a second before he hit the jump, allowing me a margin of 3 seconds to trigger the flash.”

And… it worked! On the first try at that. After a few more practice runs, they used this setup to capture the photos below of Bibi doing a Tailwhip—that’s where you push the back of the bike and let it rotate 360° underneath you in the air… imagine doing that with a full-sized DSLR strapped to your head: 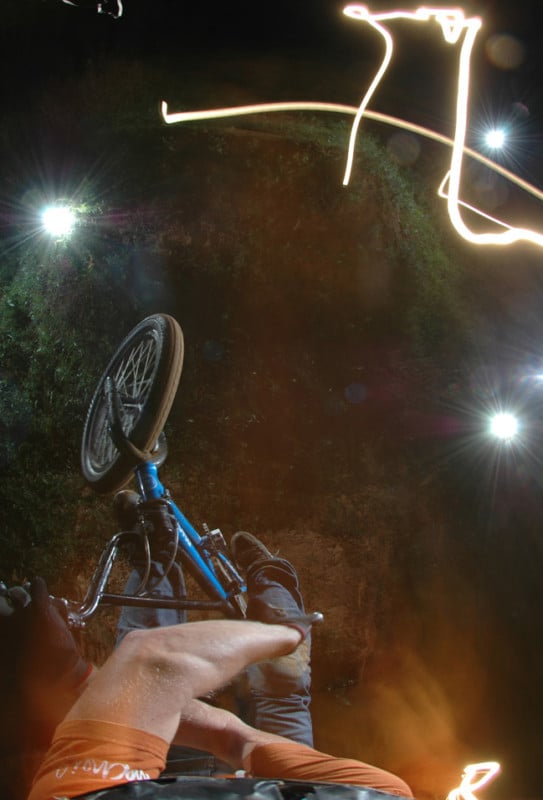 And here’s a photo of the trick in action: 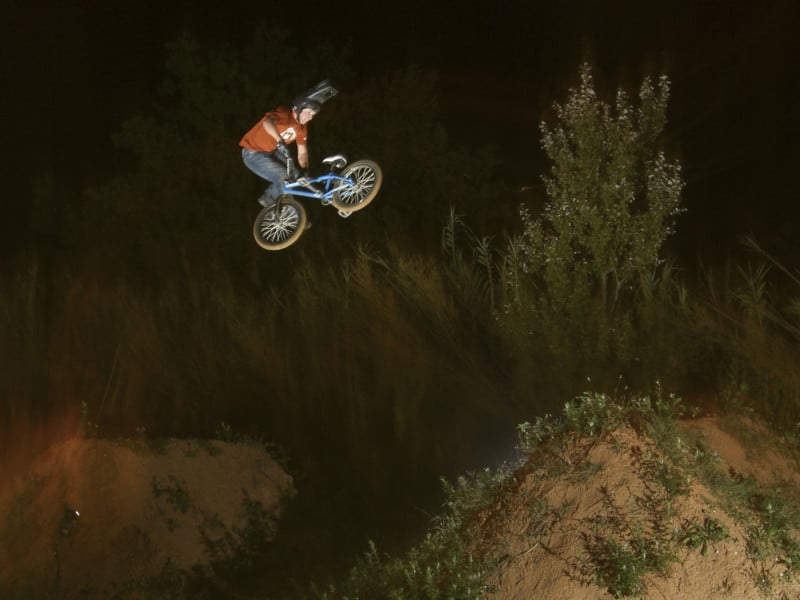 Picard admits that the photos they captured are far from perfect.

“You can see the flashes and I cut off the right hand… but I don’t care,” he says. “I had a unique photo at that time, we had some fun, and nobody got hurt. In that kind of photography it’s all that really matters at the end.”

Truer words have never been spoken. A big thank you to Hadrien for sharing this story with us—and to Bibi and Alex Dropsy and Guilbert for helping to bring this idea to life 14 years ago. If you want to see more of Hadrien’s work, be sure to visit his website or give him a follow on Instagram.

Image credits: All photos by Hadrien Picard and used with permission.