Today I’m going to talk about the correlation between lackluster street photography and avoiding taking risks when out shooting people in public. Before I do, however, I thought it would be helpful to first offer my own definition of street photography. If it does not align with your ideas on what street photography is, well that’s perfectly fine. To each his or her own, right? 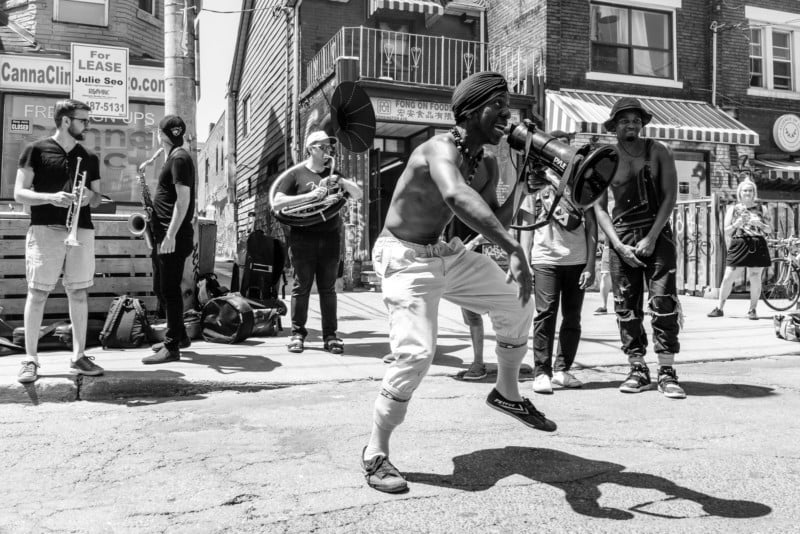 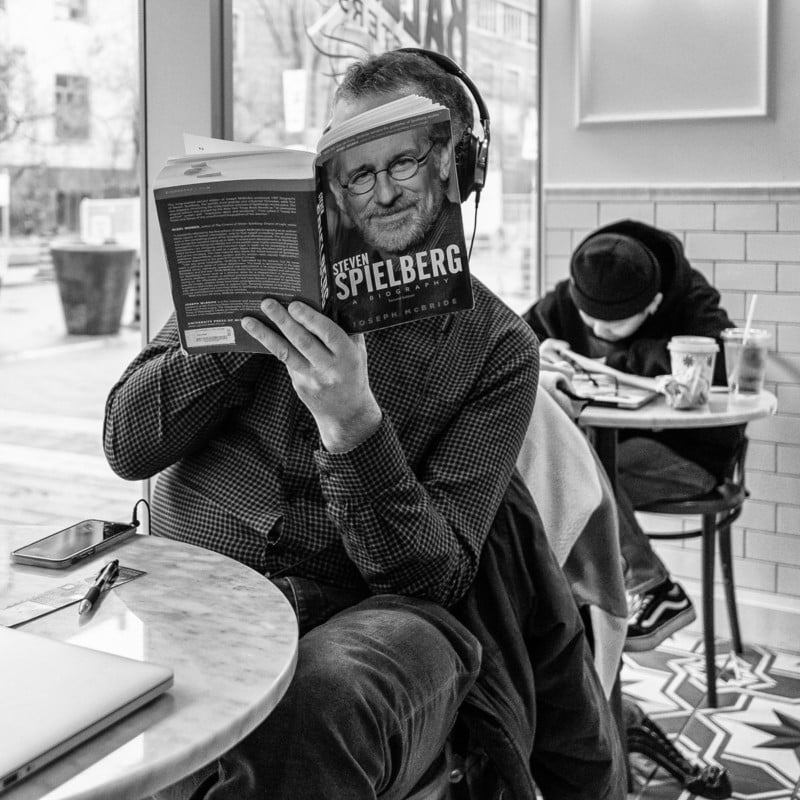 Street photography is usually random, candid, and somewhat incoherent. It’s often ambiguous. It suggests rather than insists. Its focus is more on the capturing of eye-pleasing, compelling compositions than the need to tell a story.

It can include people but does not have to. It can be honest and it can be deceitful, and sometimes both at once. It defies any attempt to define or label it since its interpretation is ever-evolving. Simply, it is free verse poetry in a visual format. 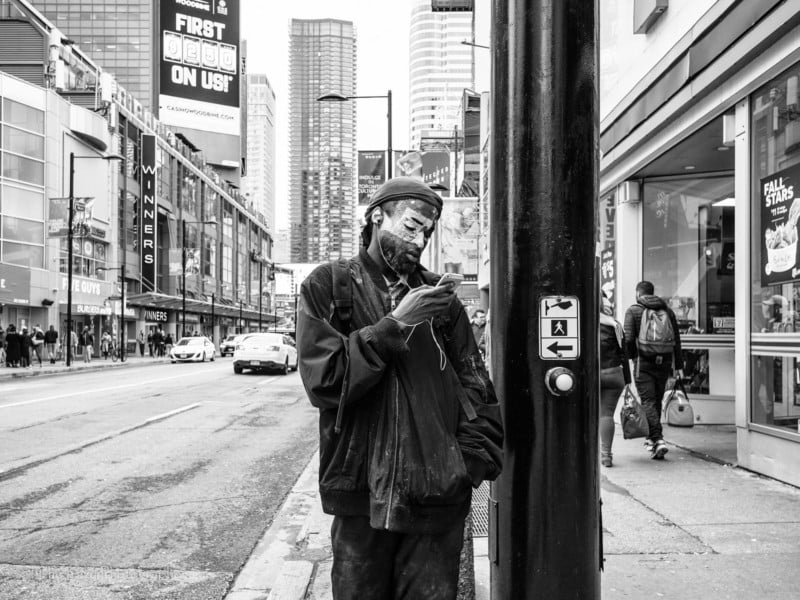 Good street photography, like good poetry, evokes an emotional response, which ignites the imagination of its viewers inviting them to create their own story out of nothing. Not always, of course. Some street photography does suggest a story, but unlike documentary photography and photojournalism, it’s not the cornerstone of the craft. 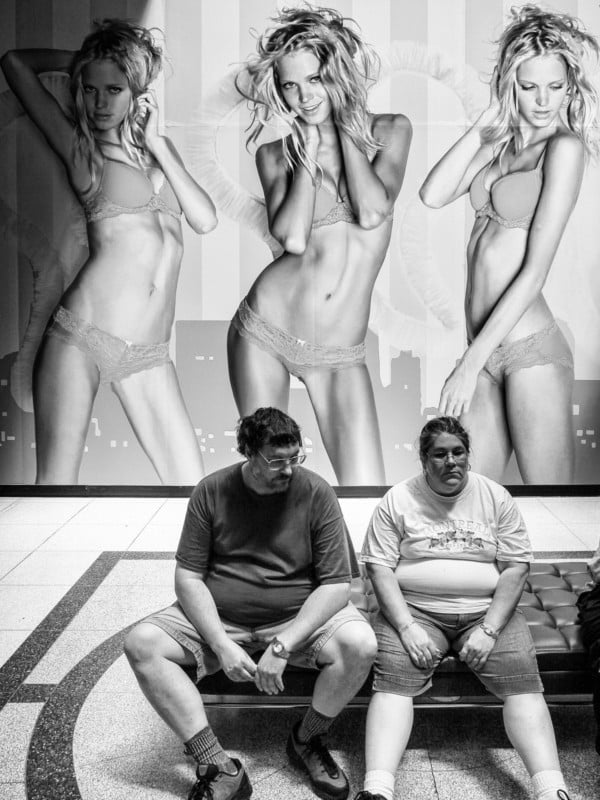 When it works, when all the compositional elements come together, along with just the right play of light and shadow, and you have a compelling, visually strong subject matter, the resulting image will usually draw attention, will demand to be considered and explored, and hopefully revisited. It looks easy enough, but looks can be deceiving. There’s more to street photography than simply taking pictures in an urban setting. Experienced street photographers are able to pre-visualize that decisive moment as it is still coalescing in their viewfinder. They are also fearless when it comes to getting in close to their subjects. Learning to overcome your fears is one of the most important aspects of becoming a good street photographer and that’s what I’m hoping to explore here. First, let’s go over some of the habits of risk-averse street photographers. If any of the following strikes a chord, not to worry, we’re all guilty of this sort of behavior and shooting style. Neil Simon is often quoted as saying, “If no one ever took risks, Michelangelo would have painted the Sistine Chapel floor.” This quote speaks to one’s presumable (and in my case, reasonable) fear of heights, seeing as the Sistine Chapel’s ceiling is a vertigo-inducing 68 feet above the floor. It’s not the fall that kills you, it’s the sudden stop. Personally, I have no interest in confirming that theory. 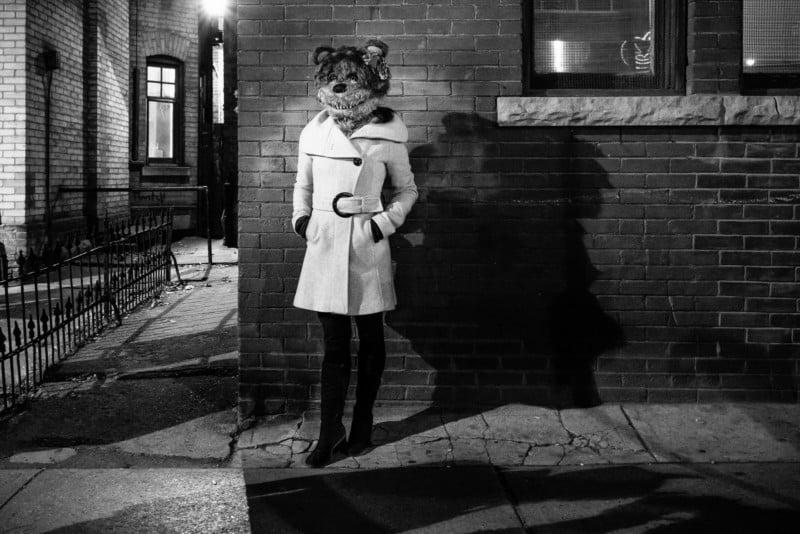 It also speaks to the fact that sometimes your best and most rewarding work is born out of that which is most difficult to achieve. If producing good street photography was easy, everybody would be doing it. With street photography, it’s up to you to determine the level of risk with which you are comfortable. Just know that in many cases comfort and quality are, to an extent, mutually exclusive. I know, because like most street shooters I, too, have spent my fair share of time avoiding risk and my photos suffered for it. 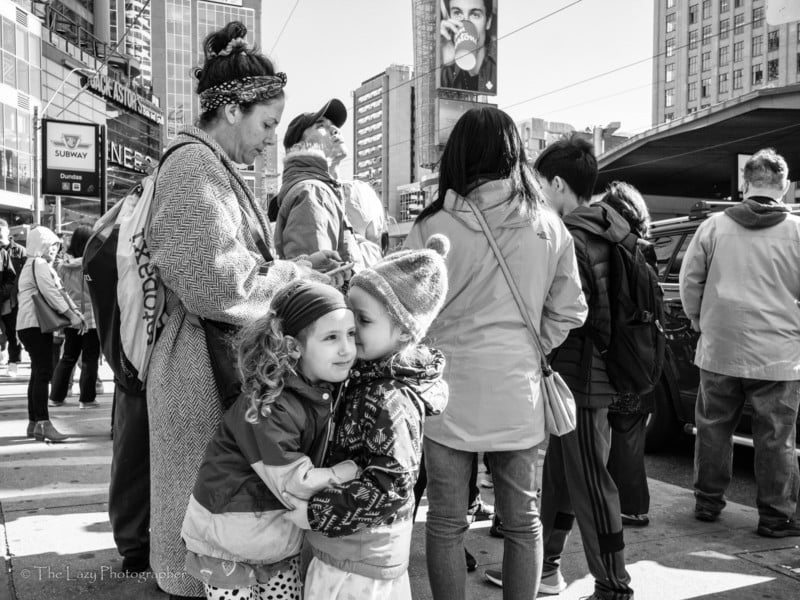 The risk-averse street shooter might be comfortable shooting an empty street sans people. More times than not, the resulting image is about as exciting and engaging as a ripe Banana duct-taped to a boring white wall.

If he or she does include people in said image, count on them being as small as an ant’s turd. If like me, you’re into candid and interesting faces and expressions, not to worry, a quick 800% zoom into the image and there you go. Sure, the pixels and noise will be the size of acorns but that’s beside the point. Then there are those who take shots of people from like a quarter mile away with a 35mm or 50mm lens, so as not to offend. In post, they’ll severely crop it down and voilà there’s your close-up candid of people. Yes, the resulting image will be about as muddy as a politician’s promises and as sharp as a puddle of paint, but at least no one had to travel outside of their little zone of anxiety-free comfort, right? It’s both easy and peasy. 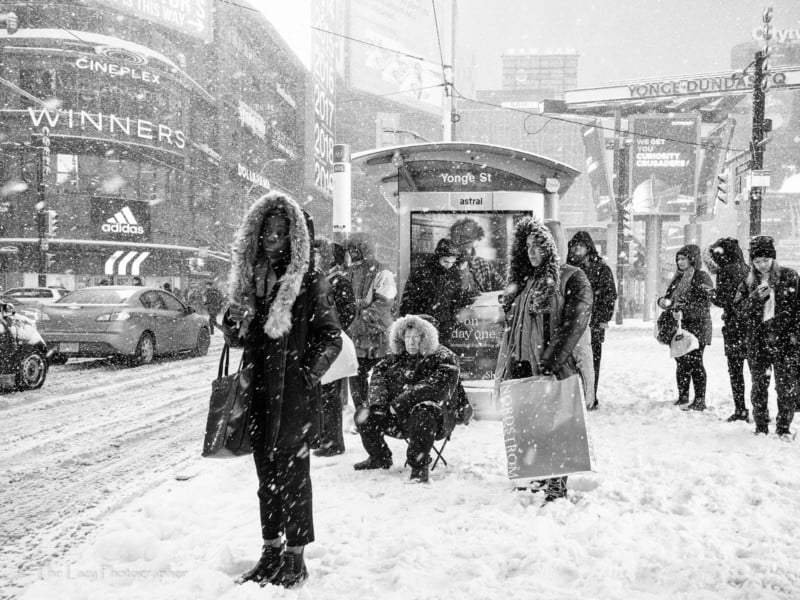 Another exciting way to engage in risk-free street photography is to employ a long telephoto lens. Snapping away at people roaming around downtown from your front porch in the suburbs is a sure way to avoid any uncomfortable confrontations. Plus, think of the money you’ll save not having to actually drive to where the action is.

Long telephoto lenses also offer features not available to regular lenses, such as lens compression and a depth-of-field as shallow as an Instagram influencer. How exciting is that!? Pretty darn exciting, if you ask me (insert looong yawn here). 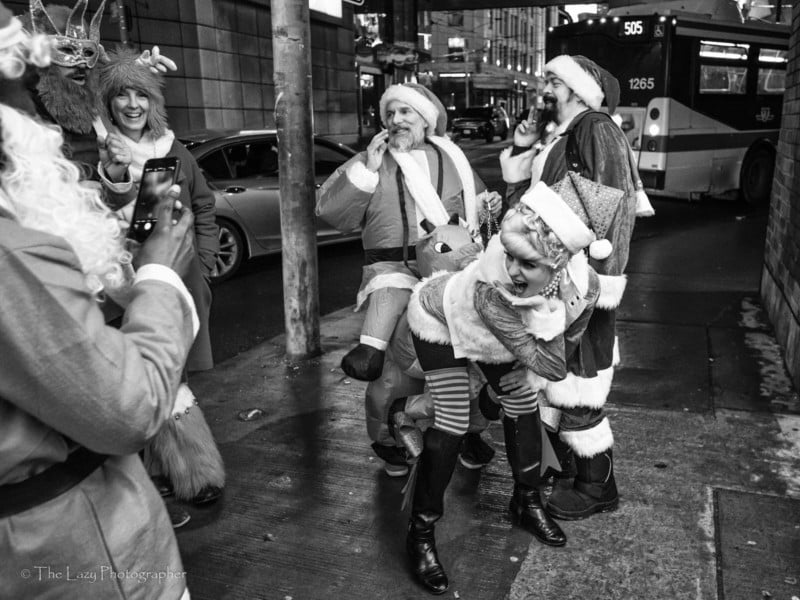 Don’t get me wrong, sometimes it works but mostly it doesn’t. Mostly, when I come across such images, I find myself asking why? Why did the photographer even shoot this? What am I supposed to be getting from this image? When in doubt, assume it doesn’t work, hit delete and save us all from having to see yet another boring shot of a person’s back. 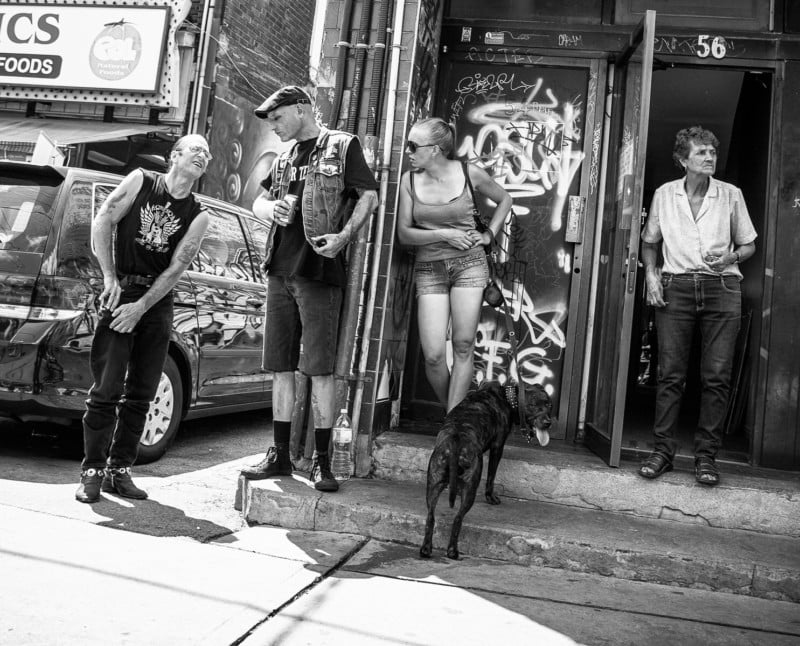 So just when does shooting people from behind work, you might be wondering. When the people in the shot are not your primary subject but rather a compositional element that balances out the image or provides a sense of scale. The image should be able to stand on its own without those peoples’ backs in it. Even then, your image will be stronger if they are facing you rather than facing away from you. 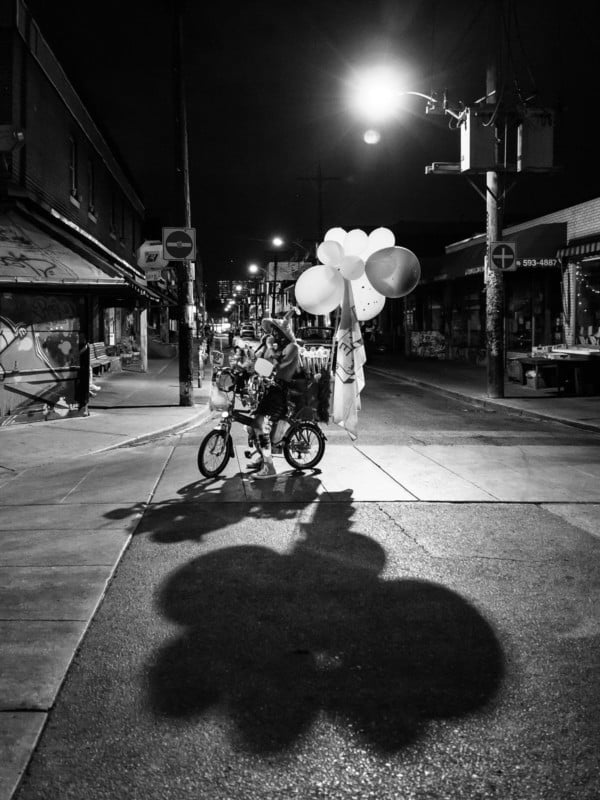 By this point, many of you experienced street shooters will have already surmised where I’m heading with all this. It can be summed up in one discomfort-inducing sentence: Shoot wide and get close.

A quick Google search of the best images made by the masters of street photography over the past century will confirm this. Time and again you’ll see candid, close up shots of people living their lives in an urban environment. Yes, some of the masters (Saul Leiter immediately comes to mind) explored the streets with a long lens mounted to the front of their cameras and produced some stunning images along the way, but where’s the challenge in that? 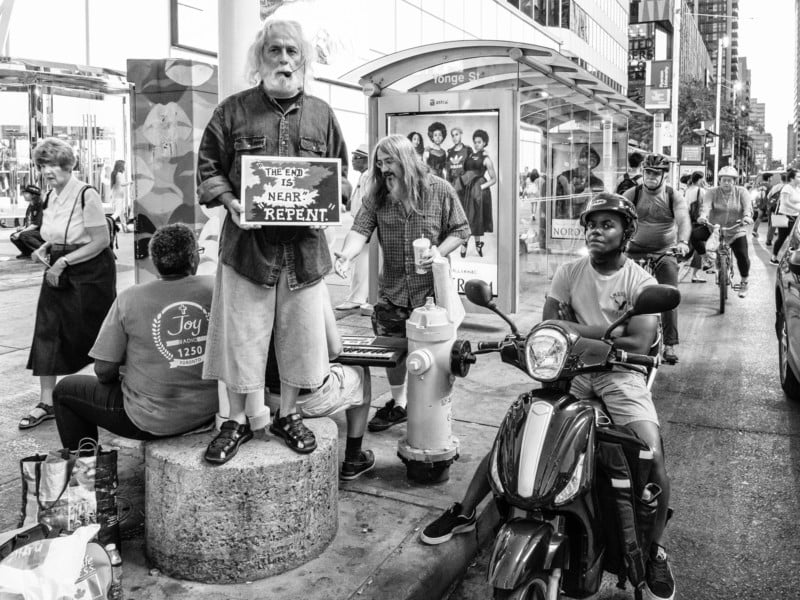 For me, the act of trying to capture that decisive moment on the street is a difficult endeavor made exciting by pushing myself outside of my comfort zone. I know I’ve been a little hard on those who aren’t yet comfortable getting in close, but I truly feel you are missing out on the thrill and perhaps not yet producing your best work. I know because I’ve been there myself. 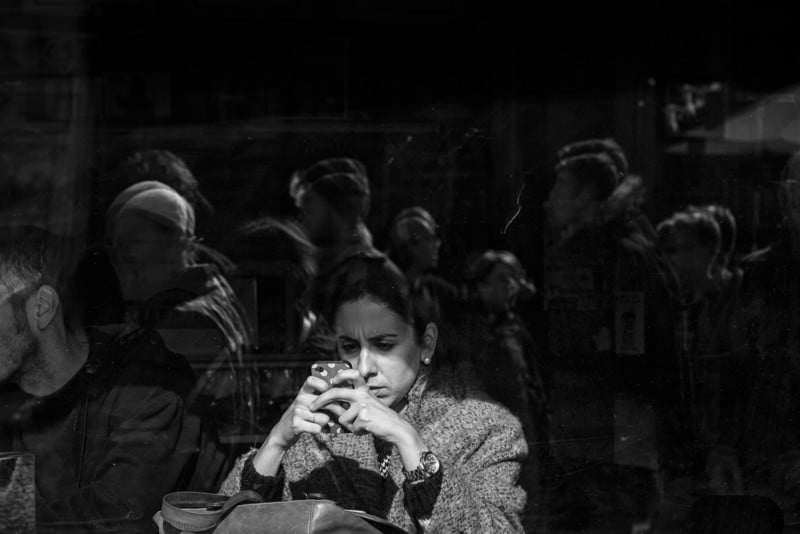 One good way to start out is to hit the streets with one or two other more experienced shooters. There’s safety in numbers and often your courage quotient will increase when you know someone’s got your back. 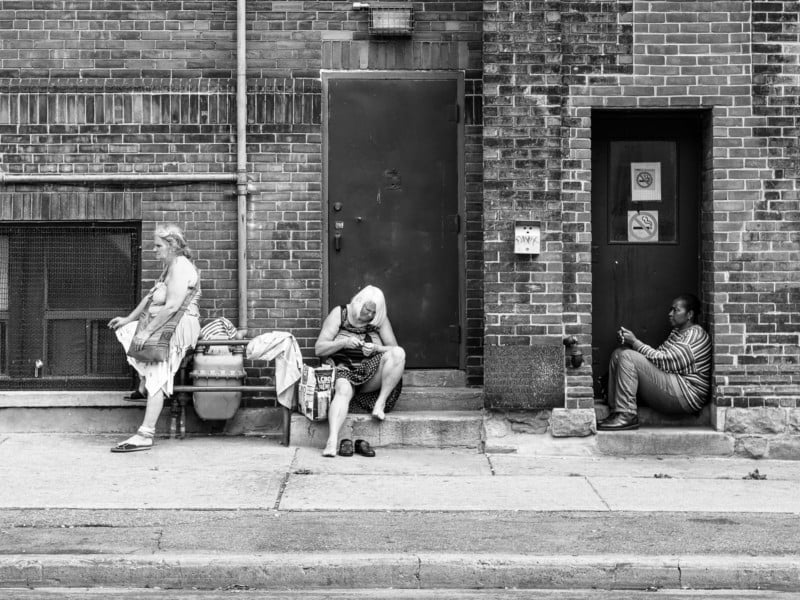 Introduce a wide prime (24mm, 28mm, 35mm) to your camera, if you’ve got one, and you’ll have no choice but to push yourself beyond your boundaries. Plus, the lens distortion a wider prime offers can really add interest to an image if you’re close enough to your subject. If you’re the shy type, try asking friendly-looking people to pose for a photo. It’s a good way to get a handle on talking to and photographing strangers. You’ll be surprised at the number of people who will say yes to your request. When in the field do your best not to look apprehensive about taking pictures. Ideally, you want to come across like you are supposed to be there shooting away. You’re a street photographer engaged in your craft, so own it. People will be less likely to respond negatively if you look like you’re busy working with your camera. The thrill of getting in close and capturing a compelling image is like a drug that’ll change the way you see and shoot. Overcoming your fears will take practice and lots of it, of course, but in time you’ll be making images that would have made Cartier-Bresson raise an envious eyebrow in delight.

P.S. Here’s a video in which I share some street photography advice while shooting with the Fujifilm X-Pro3 on the streets of Toronto.

About the author: Dave Bottoms has spent the past decade exploring the streets of Toronto, Canada, where he calls home. The opinions expressed in this article are solely those of the author. Around Bottoms’ neck hangs a Fujifilm X Pro 2 sporting an 18/2 prime most of the time. Dave is also an Admin for the Toronto Street Photography and Canadian Street Photographers groups on Facebook. When not taking pictures he is a freelance writer/editor for hire and is currently working on a street/documentary photography book of his work. You can find more of his work on his Instagram and blog.