As bushfires consume nearly 20 million acres in Australia, killing 24 people and an estimated one billion animals, it seems somewhat trivial to contemplate which image will end up defining and representing this apocalyptic event – especially considering the dry season will continue for a few more months. The scope of the fires has been difficult to comprehend, and indeed, the world largely ignored the first two months of the conflagration.

Infographics have been helpful in providing scale to the fires, but like most infographics, there’s a certain sterility that doesn’t provide an emotional connection to the tragedy. Other infographics are downright misleading. 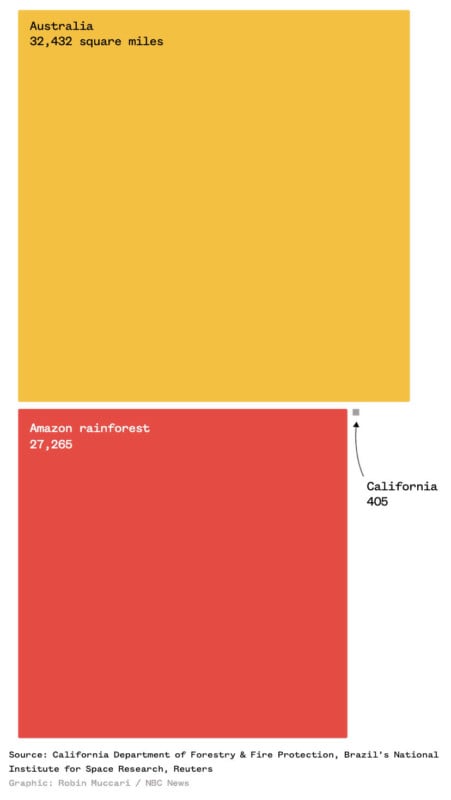 That is precisely why Matthew Abbott’s photo of a kangaroo jumping in front of a burning house in Lake Conjola, NSW has become so iconic. The New York Times assigned Sydney-based Abbott (@mattabbottphoto) to cover the fires, and his work has been both extraordinary and heart-breaking.

Abbott’s image appeared on Dec 31, 2019, and immediately went viral – mostly without attribution. The image contains a number of elements that make it instantly iconic:

Iconic images from the past like John Moore’s “Crying Girl”, Jonathan Bachman’s image of Iesha Evans, or Julia Le Duc’s border drowning of Oscar Alberto Martínez Ramírez and his daughter Valeria captured the public’s attention and outrage. But I’m hard-pressed to think of an image in the past decade that has both gone viral and spurred tangible action (in the form of fundraisers).

Numerous celebrities and other large social media accounts have posted the image:

Please share with your followers right away: Huge wildfires in Australia are growing steadily bigger, causing tens of thousands of people to evacuate while also killing hundreds of millions of animals in their wake! The state of New South Wales just declared a state of emergency, with the authorities warning that the fires heading their way this weekend might be the worst yet in an already catastrophic season. The devastation is immense. At least 15 people have died, with 8 deaths confirmed in the past week. Fires raged across forest and scrubland along Australia’s Pacific coast, choking cities with thick smoke, charring more than 1,800 houses and killing countless wild animals. This is the worst fire season in Australia’s recorded history and what we can do to help is share these powerful images to make this go viral like the fires in Brazil did a few months ago as only then will international aid truly happen. Please join us in praying for Australia and also let’s all use our social media platforms for good and share this post with your followers and tag people, influencers, celebrities and news media that need to see this as we MUST get the word out about this urgent crisis and get international help for these communities! Photos (in order of appearance) by the great photographers @mattabbottphoto @david.caird and @nampix. Video by @frnswmedia and some of the local charities we support are @wireswildliferescue @1300koalaz @deeppeacetrust @balubluefoundation @adelaidekoalahospital @nswrfs @redcrossau and every donation, great and small, are appreciated as we must come together to help Australia ASAP! #sendhelp #wildfires #karmagawa Caption via @karmagawa

Retailers are using the image to raise awareness and funds:

And of course, a number of scams have emerged using the image to build audiences.

What makes an image iconic is subjective, but Abbott’s image will almost certainly stand the test of time – a totem for this disaster, and a harbinger of terrible climate-related tragedies to come.

About the author: Allen Murabayashi is the Chairman and co-founder of PhotoShelter, which regularly publishes resources for photographers. The opinions expressed in this article are solely those of the author. Allen is a graduate of Yale University, and flosses daily. This article was also published here.