Earlier this year, a group of well-known professional photographers was robbed… by another photographer. Approximately $12-$15K worth of gear was taken from their studio by a peer almost three months ago, and they were only able to recover the gear earlier this week, though they still don’t feel they’ve received anything resembling justice.

Miranda, whose gear was among the stolen property, revealed that the studio had been burglarized by fellow photographer David Scott Holloway. In a series of Instagram stories, he claimed that the photographer admitted to the crime after being arrested, and expressing his disgust that a working photographer would steal from his peers: 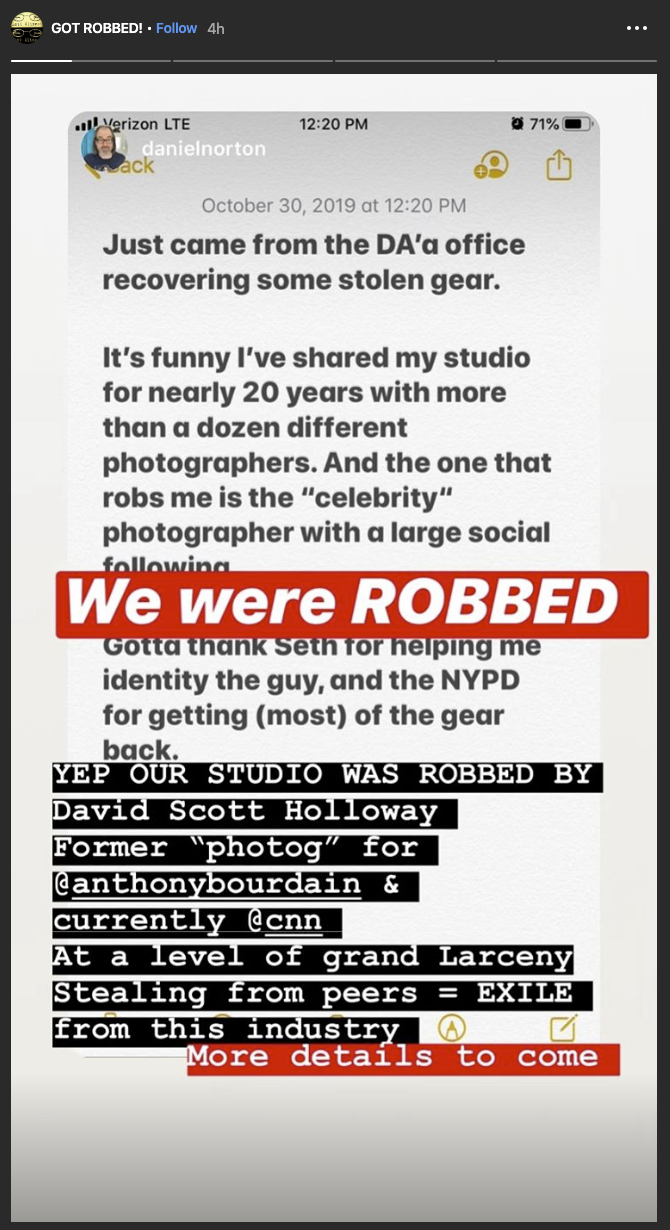 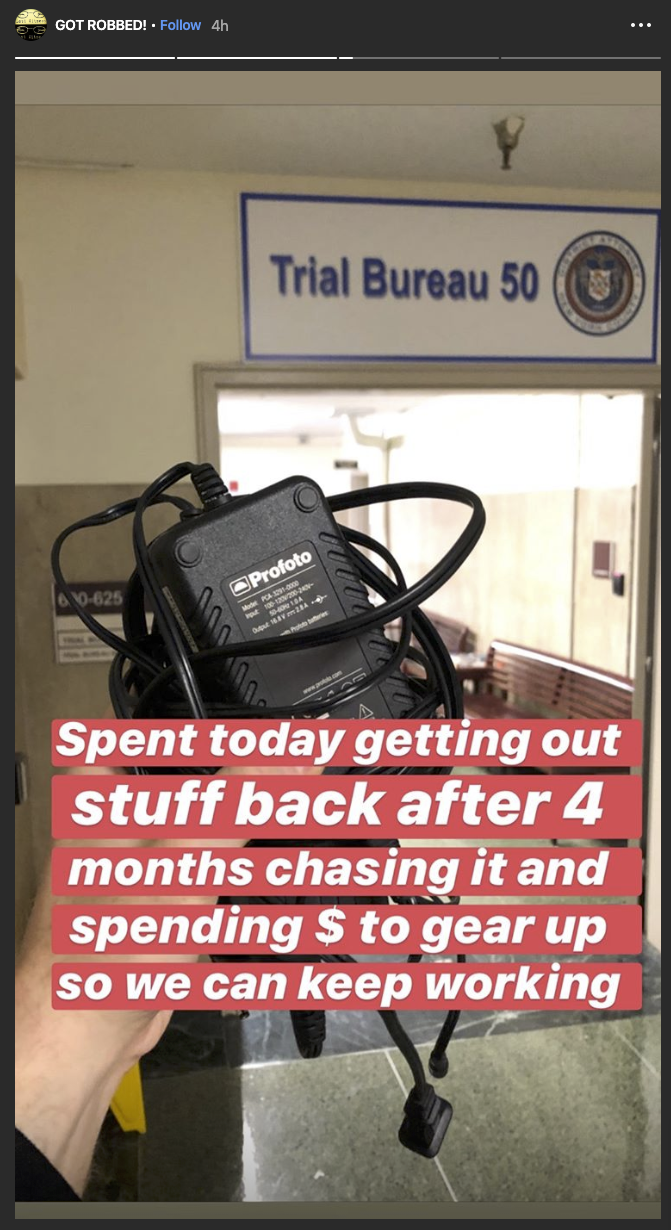 Since the story “broke,” PetaPixel has spoken to several sources close to the studio, who shared the whole unbelievable story with us and even sent photos of the security cam footage from the night of the theft.

According to them, Holloway joined the studio in question—a collective in New York City made up of 5 professional photographers—in late Spring of 2019.

While not a household name, Holloway is by no means unknown. As his (now private) Instagram account and website attest, he was a staff photographer for CNN parent company Turner Media until 2014, where he worked extensively with the show Parts Unknown staring the late Anthony Bourdain. He even appeared on the Photo Brigade podcast in December of 2018, when he was described as “an amazing photographer […] who had the ultimate privilege of documenting the adventures of Anthony Bourdain.”

You can watch that interview below:

But despite the sparkling resume, issues arose immediately. According to his fellow photographers, Holloway was consistently late with rent. When confronted by this fact, he began booking all the available slots in the studio but never coming in, just to “mess with” the other photographers who were a part of this studio.

Holloway left the studio without notice in July, and only came to collect his things after the studio’s owner withheld his security deposit. In fact, the deposit may have been the catalyst for the theft.

According to our sources, Holloway cleared out his things on July 21st, but handed over a fake key. He then returned on August 11th, as captured on the security cameras, and took between $12,000 and $15,000 worth of gear in a manner that was described to us as “obviously premeditated.” 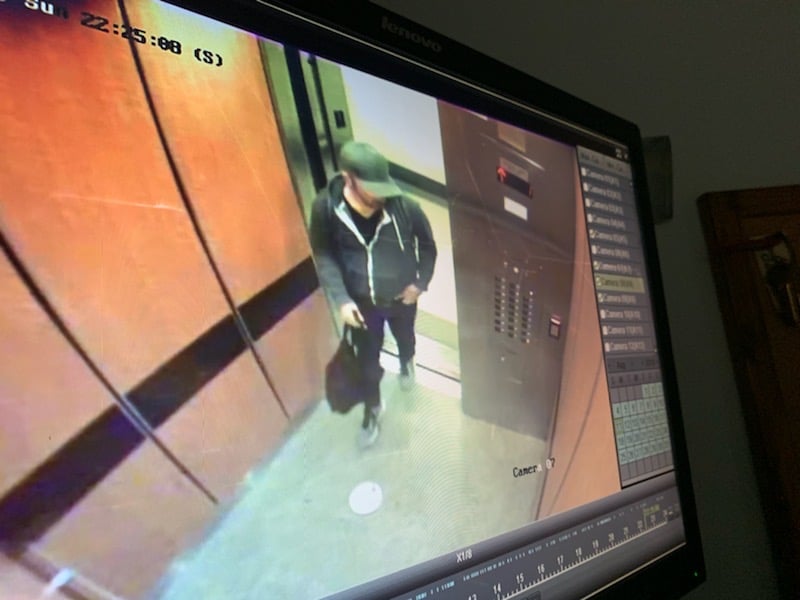 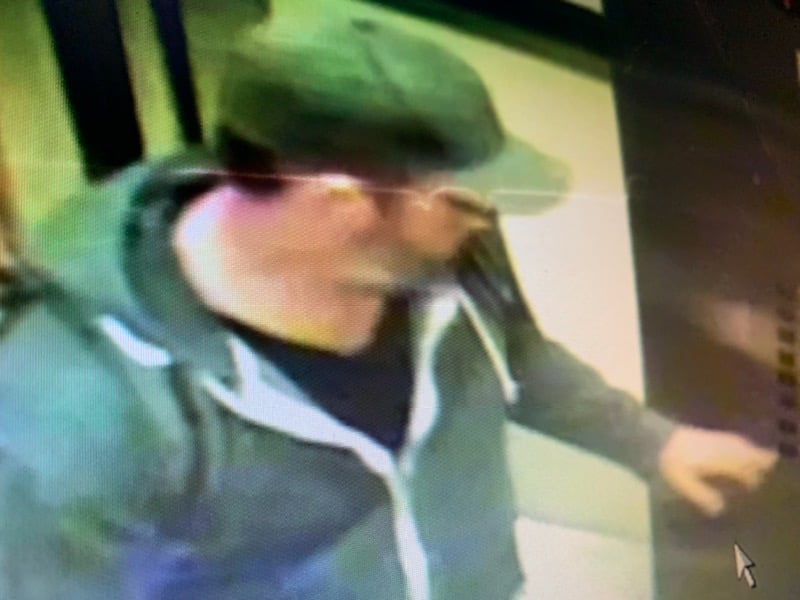 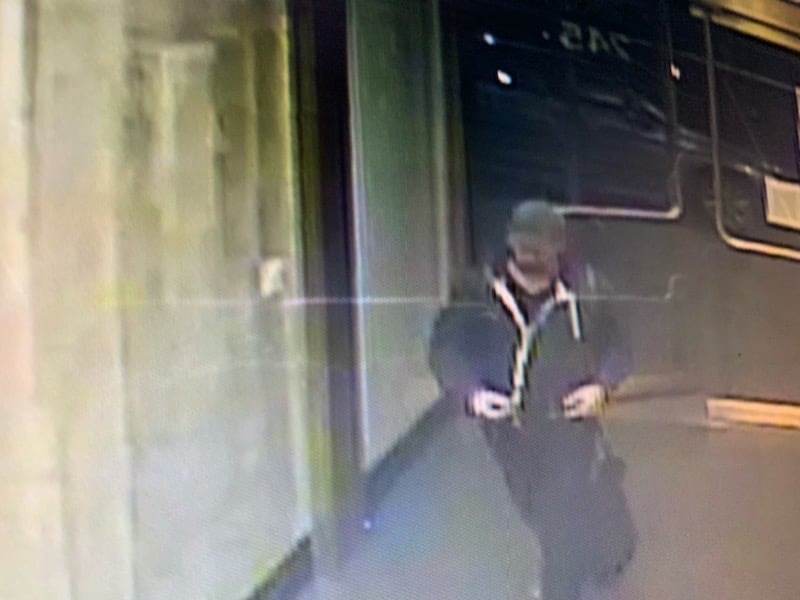 After waiting outside for someone to walk out—he no longer had access to the building, only the studio itself—he took the elevator up to a lower floor and walked up to the studio.

“He thought he was so smart,” one photographer told us. “He only took the elevator to the 7th floor (the studio is on 12) then he got off and took the stairs the rest of the way. On his way out, he took the stairs all the way down. All that, but he wore the same hoodie and hat you see him wearing in all of his Instagram stories.”

Because Holloway knew the shooting schedule for the studio, our sources say he knew that nobody was going to be using the space for two days after the theft. He also apparently knew whose gear he was taking, as he’d helped re-organize the studio a month prior. 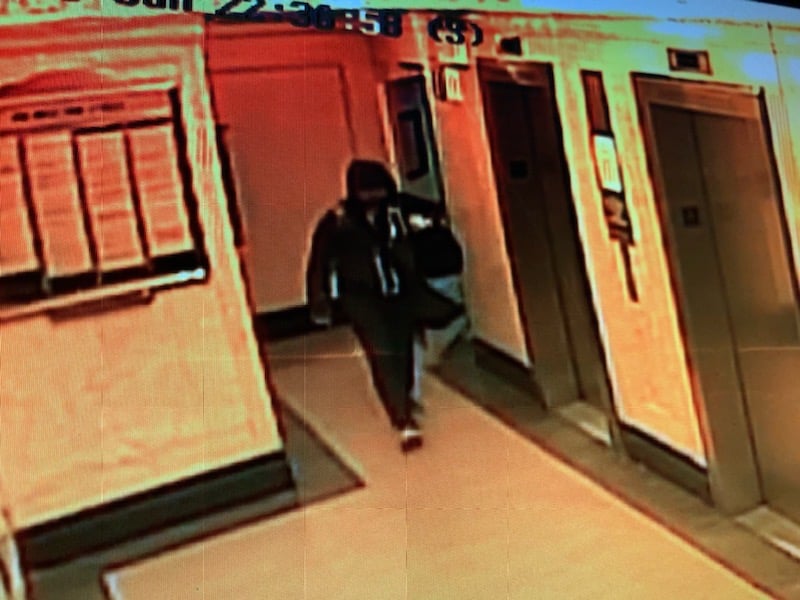 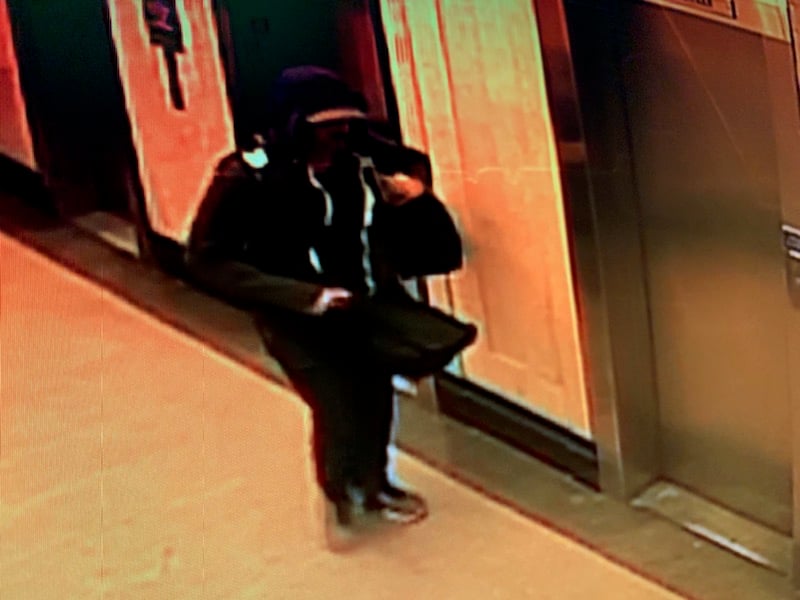 Once the tenants were able to identify Holloway from the tapes, they reported him to the NYPD and began the months-long saga of getting the stolen gear back. This, said the photographers we spoke with, was Holloway’s saving grace: he kept the gear, either because he needed to use it, or because some of the specialized gear he’d stolen would be hard to sell without arousing suspicion.

The photographers whose gear was stolen had to spend months borrowing, renting and buying new gear in order to complete the shoots they’d already booked. Some of the stolen gear was on loan from friends and fellow photographers. As such, their top priority was to get the equipment back as quickly as possible.

Miranda alleges in his Instagram stories that Holloway was able to use this fact to his advantage, returning the gear “in exchange for lesser charges.” 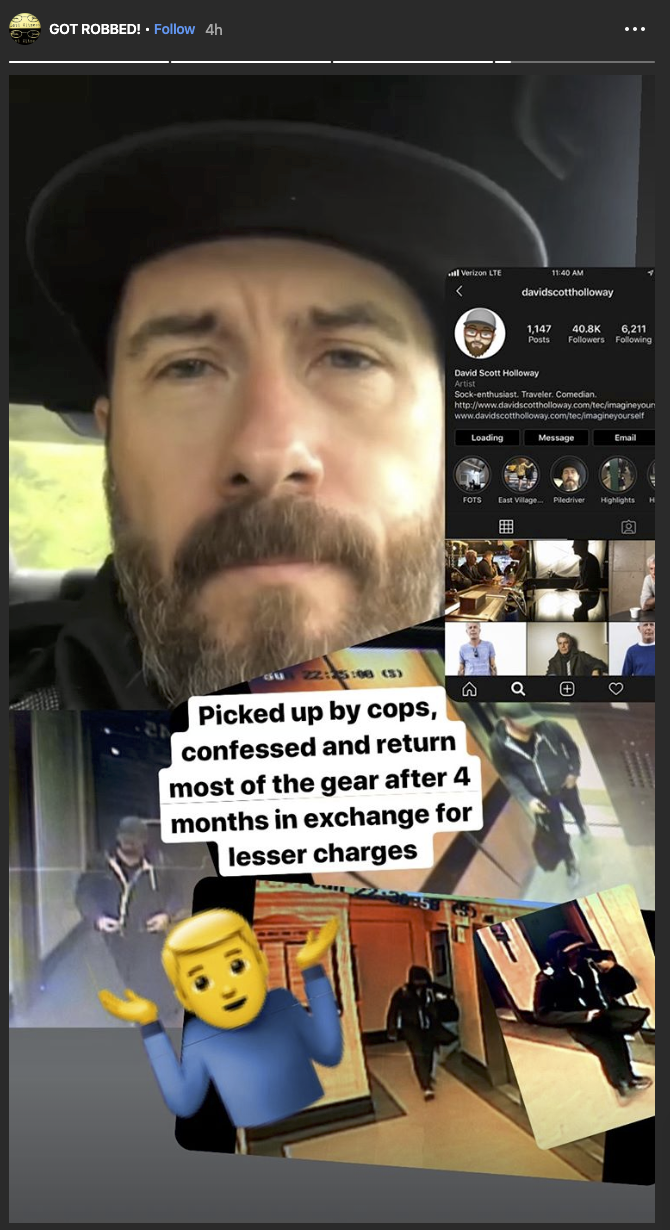 The photographers who were affected by this theft are, understandably, upset by the entire situation. The NYPD allegedly told them that Holloway will not face any jail time or other major consequences, explaining that this was “the best outcome they could expect” if they wanted the gear back.

And Holloway’s defense? He allegedly told the detectives that he did it as retaliation for the withheld security deposit.

“All he has is a little black mark on his record,” said one photographer. “This guy skates on every level, and if we didn’t have the footage he woulda kept all the gear living blocks from the studio.”

Though this is a disheartening story overall, photographer Daniel Norton—whose gear was also stolen as part of this ordeal—ends our conversation on a brighter note. When we reached out to him for comment, he wrote:

I guess if were to add anything it’s that during the period we were without gear and could have potentially lost work, friends came through with loaner gear and support. While this guy might give a bad taste in one’s mouth about photographers, the rest of our community really showed he’s not the typical photographer. I still believe most are are willing to help when able and support fellow creatives.

Miranda seconded that sentiment in another Instagram story post, thanking all of the photographers who had come to his and his fellow shooters’ aid since he revealed what happened to his followers: 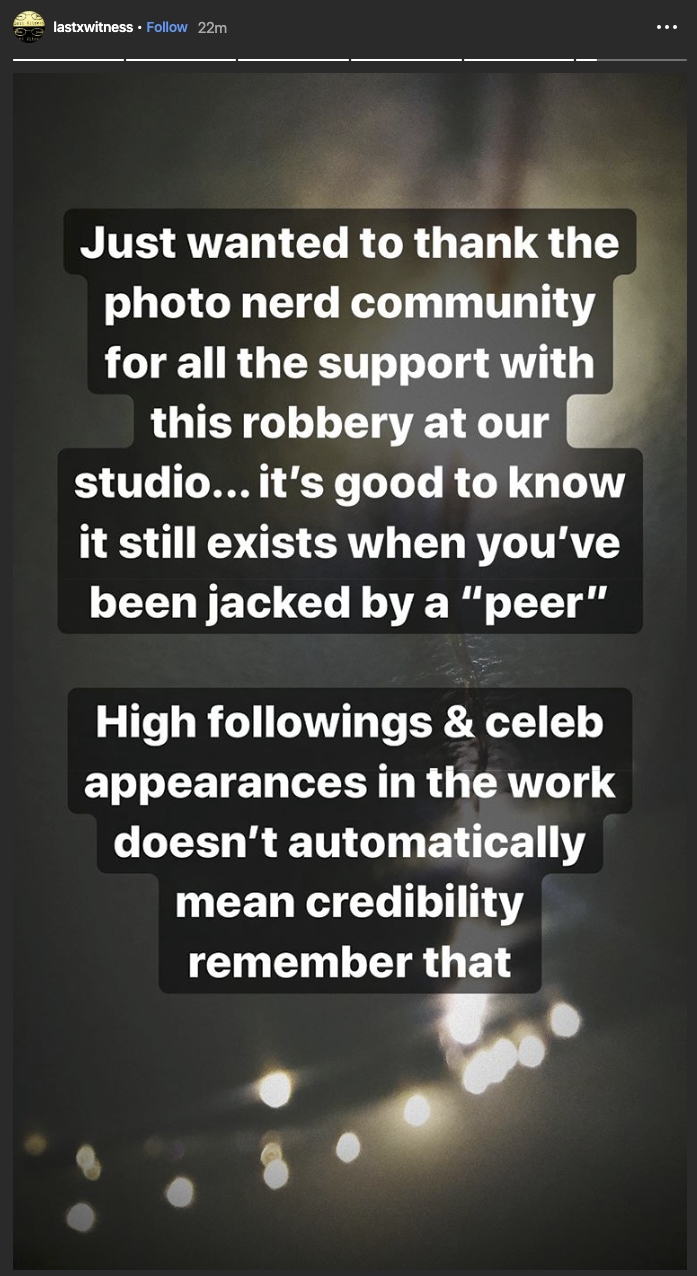 We’ve reached out to the NYPD in order to try and confirm whether or not Holloway did in fact confess, and what, if any, consequences he will face now that he’s returned the gear. We will update this story if and when we receive any further information from an official source.

Mr. Holloway declined our request for comment, citing advice from his attorney.

Editor’s Note: The title of this post has been updated, as some commenters felt it was in poor taste to include Anthony Bourdain’s name in the headline. We apologize to anybody who was upset or offended.

Correction: We have been notified that Holloway was not a “CNN photographer” as previously characterized, but a staff photographer for CNN parent company Turner Media from 2011 until 2014. Our coverage and headline has been updated to reflect this fact.