Just over a week ago I saw some big news reported by PetaPixel: Antelope Canyon would be ending photographer-only tours. These tours were long favored by photographers because, well, Antelope Canyon is a pretty tough shooting environment and a tripod made cleaner shots and bracketing possible.

Photographers the world over were aghast at the news. Antelope Canyon sits atop many a photographer’s bucket list because of its incredible topography and otherworldly perspectives. It’s also a huge revenue source for the Navajo Nation, and that’s where I personally needed some more perspective.

When I heard the news I immediately booked a trip to Phoenix, rented a car, and headed north after meeting a dear friend for coffee. Page, Arizona, next to which Antelope Canyon is located, is very famously near absolutely nothing (it’s a 4.5 hour drive from both Phoenix and Las Vegas). It was dark for most of my drive, which was a shame because it’s simply one of the most beautiful drives in the USA. I got to Page, checked into a Hyatt Place, and slept quickly. 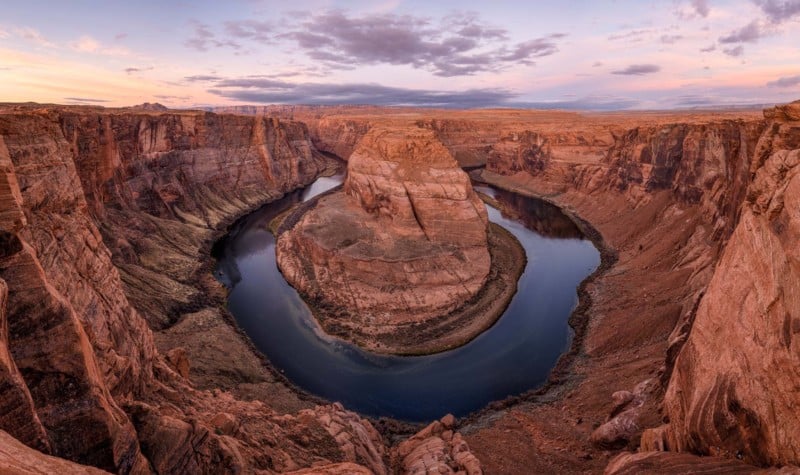 Early the next morning I arose and drove 10 minutes south of Page to Horseshoe Bend. The first time I came here, about 5 years ago, you just parked in a parking lot and walked along a trail until, well, you came to Horseshoe Bend, at which point you needed to stop before you fell into the canyon. These days things are a little more official.

Each car is charged $10 to enter the property, which is reasonable for how much traffic it gets in my opinion. The trail is better marked than before (and there’s construction going on to build more covered overlooks) and there’s a little concrete pavilion at the center of the Horseshoe Bend overlook. I brought my Fuji GFX100 camera and the 23mm wide-angle lens and set up for a good picture atop my new Peak Design tripod.

The view of Horseshoe Bend faces west, which is why so many choose sunset for the best pictures. I tend to prefer the soft pastels of the morning sun and the clouds were absolutely perfect, so I ended up with a beautiful 5-shot panorama of Horseshoe Bend. 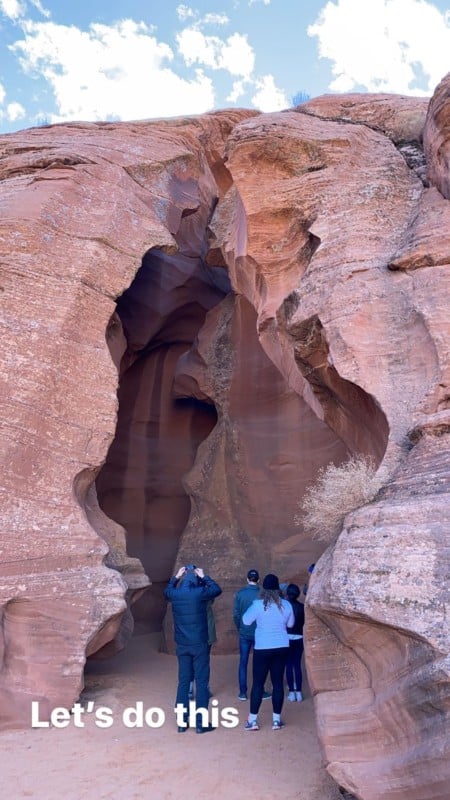 I booked the 10:15 photographer tour with Adventurous Antelope Canyon Photo Tours. They required you show up with a tripod and professional-looking camera in order to actually go on the tour (people who book it just to be part of a smaller tour and show up with their cell phone aren’t allowed to join). Antelope Canyon is east of Page, on Navajo land, so all tours are led by Navajo guides.

There was a small group of six photographers for the tour. I was the only one who had been before, which gave me a decided advantage because I knew what to expect.

We hopped into a lifted Ford Excursion SUV for the drive from the tour meeting point to the canyon entrance. The massive SUV was necessary because the drive to the canyon is through a riverbed of very soft sand. After a few minutes we arrived at the slot canyon’s entrance. Our guide, Tony, briefed us on what to expect, how everything would operate in the canyon, and some recommended camera settings. He arranged us according to how wide our lenses went. My lens was wide compared to the rest, so I was Taller Tripod and would line up behind the shorter tripod folks. 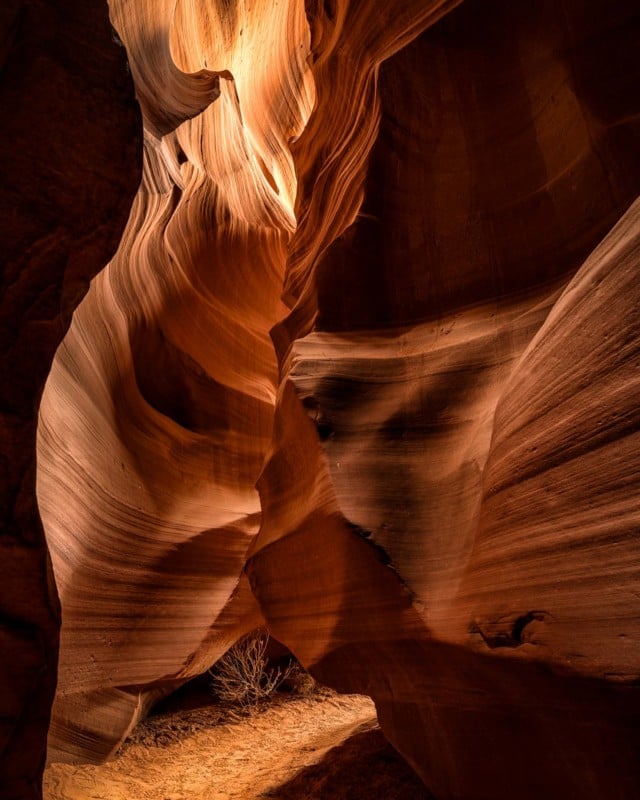 (Let me preface this bit by acknowledging I was there in a slow season. It’s an absolute madhouse in the summer, when the famous sunbeams shine into the canyon)

We made it to our first spot, and Tony drew a line in the sand for us to line up against. He suggested some compositions, yelled ahead to another guide named Kirk, told us we had two minutes, and then jumped out of the scene. We shot for a bit, and he’d come back and move us along. 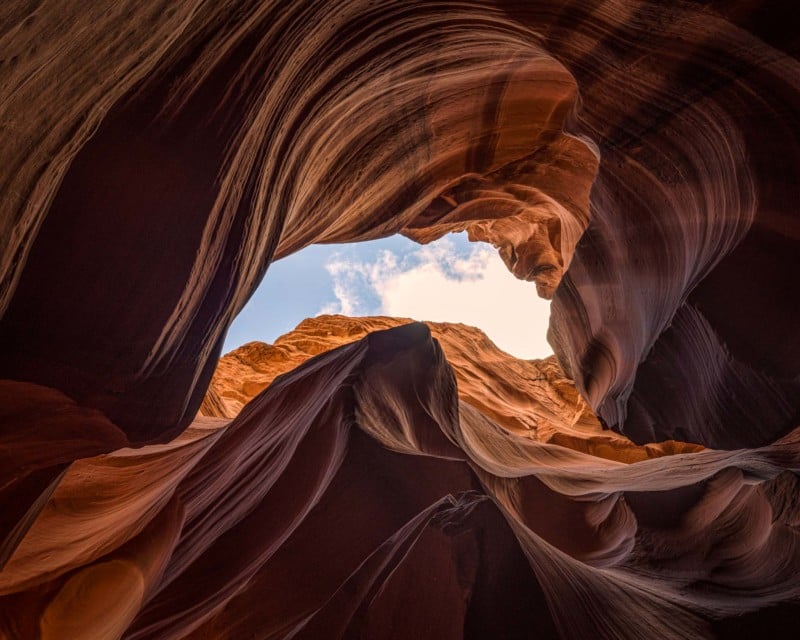 And that brings us to my first point: not all of the photographers knew their gear well. They were all incredibly nice, but one, in particular, had Long Exposure Noise Reduction on, meaning they weren’t taking as many shots as the rest of us, which slowed the group down. Our guide eventually had to kindly tell this person that he wasn’t there to take pictures for us and that we needed to stay on schedule and keep moving.

I was fine, as were most of the other people in the group, but I could tell this person ended up a bit annoyed because they felt so rushed. At the same time, though, Antelope Canyon is an incredibly difficult shooting environment for a photographer, you simply have to know your gear well in order to maximize your shooting opportunities. 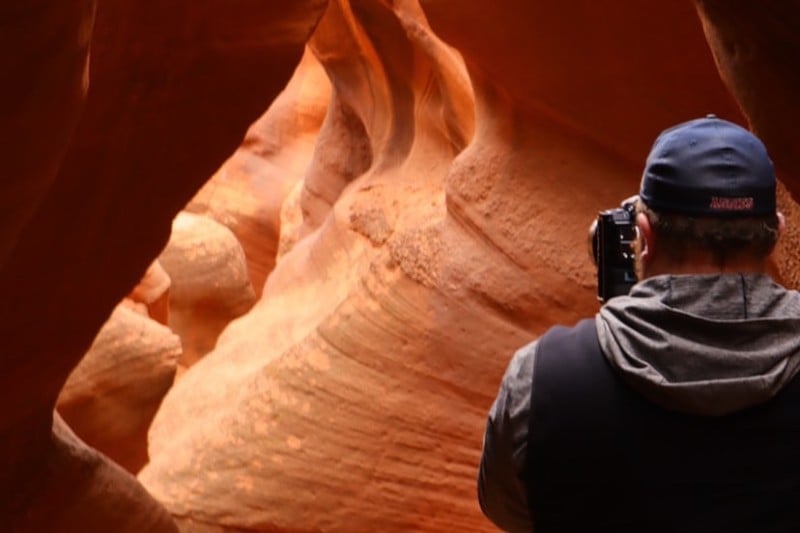 If there were somehow a way to guarantee that everyone on a photographer tour knew their cameras inside and out and didn’t need help with settings and things like that it would cut down the amount of time needed for photos, but there’s just not a way to do that. Tripods became a requirement to hopefully separate the wheat from the chaff, but tripods are so cheap now that some inexperienced folks inevitably end up on the tours with seasoned photography veterans who can work a little quicker.

We then came to one of two spots for the legendary Antelope Canyon “sandfalls” where sand cascades off the Navajo sandstone, creating some absolutely gorgeous pictures. 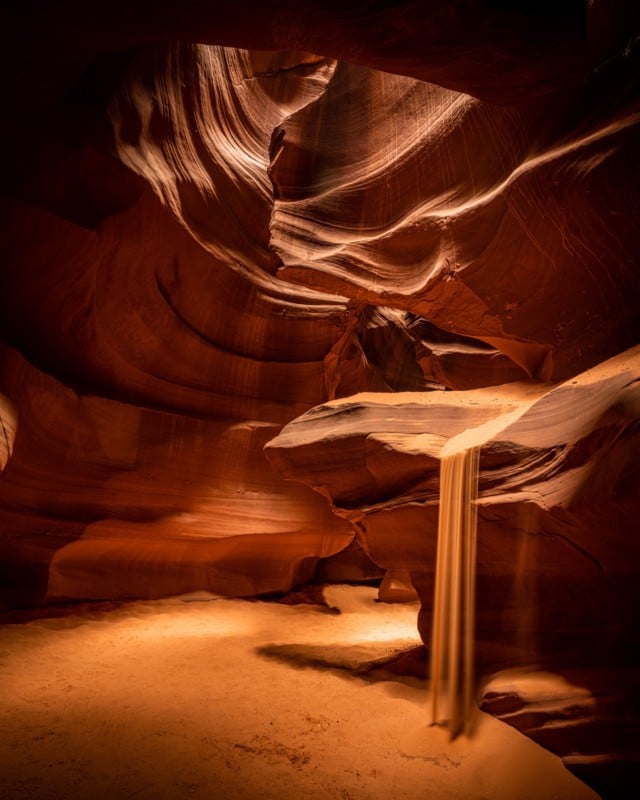 It’s absolutely incredible, but the reality is the wind doesn’t blow that much sand off the cliffs above into the canyon. What actually happens is the guides throw handfuls/shovelfuls of sand onto the rocks to create the sandfall.

Honestly, it’s easy to say this is contrived or “ruins” the experience of it, but the pictures turned out so well I certainly didn’t mind. 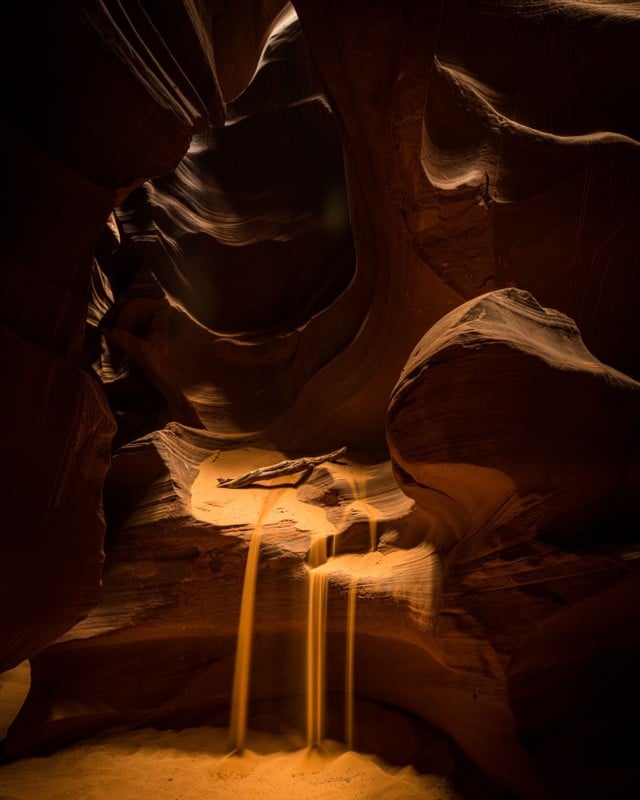 That’s the second point: this is an incredibly touristed spot. Some say that Antelope Canyon is more about “stamp collecting” as a photographer rather than creating new images, and I get that point. For me, Antelope Canyon represented a challenge: I had been there before and wanted to prove to myself that I had gotten better. As a blogger and/or content creator, I also know that not everyone has seen the sheer volume of Antelope Canyon pictures that I have seen, so it’s still fun taking pictures and showing them this fascinating place through my eyes.

One of my rules for photography is to always remember to look up when you’re shooting. There’s no better place to do that than Antelope Canyon, although the extreme dynamic range makes it problematic for most cameras. I bracketed shots and combined later to make what you’re about to see look like what I saw in real life (human eyes can see more dynamic range than a camera sensor). 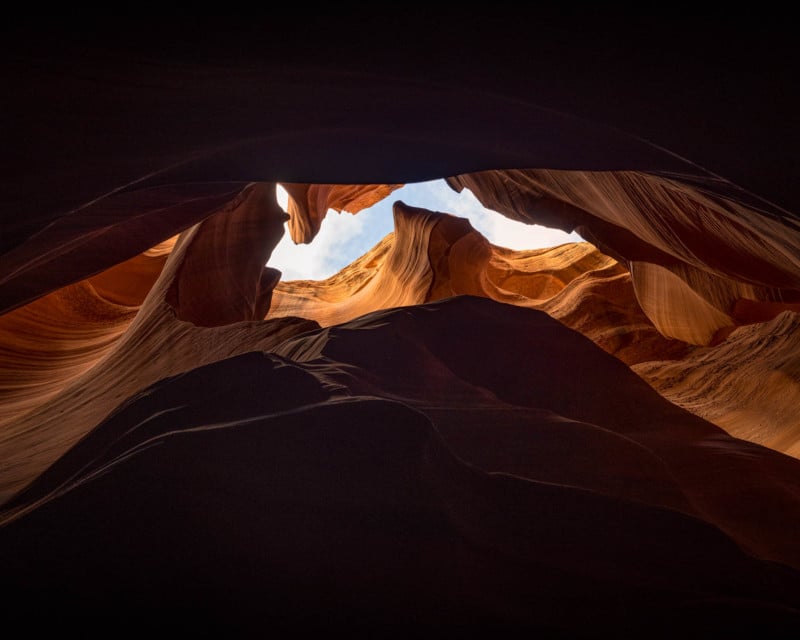 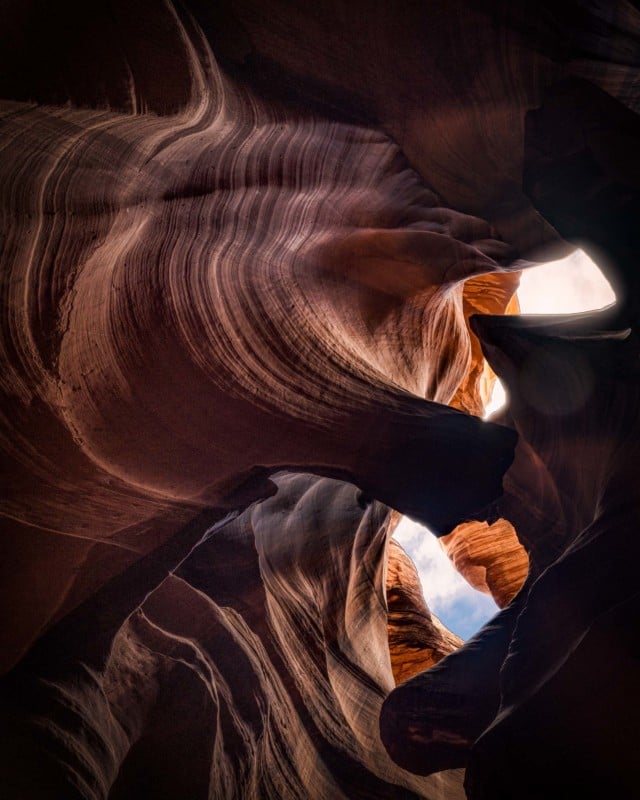 As you move further into Antelope Canyon the real estate gets a little squeezed, which brings me to my third point about the photography tours: they really disrupt the regular tours.

The guides work in concert to keep guests on the regular tour out of frame for the photographers, but this is to the detriment of the folks on the regular tour, who are just standing around for minutes at a time. Once we were done with our shots, we’d fold in our tripod legs and walk past them quickly in narrow canyons, unintentionally bumping them from time to time.

It just interrupted the flow so much, I felt bad for the people on the regular tours, who had come just as far as I had to visit this place. 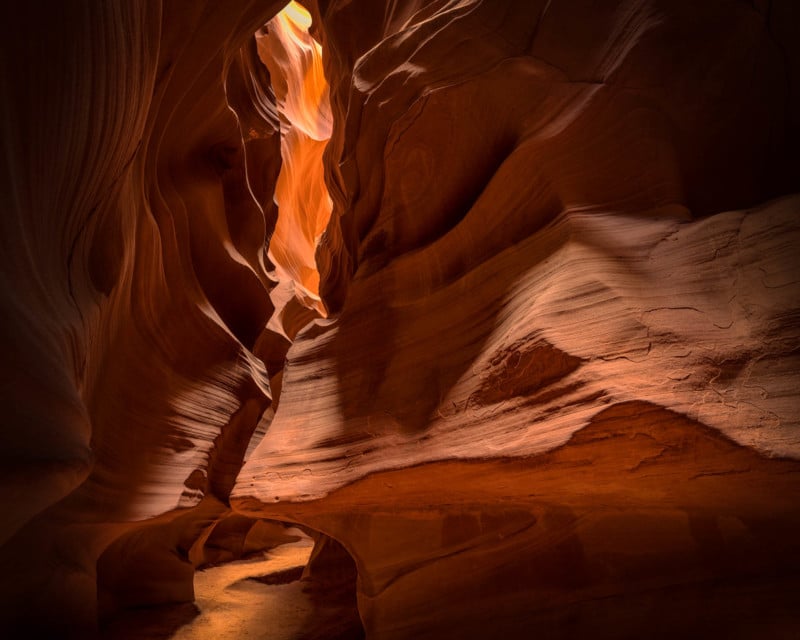 At the same time though, having the tripod enabled me to take some absolutely phenomenal pictures without the graininess of higher ISOs, unleashing the full power of the 101-megapixel Fuji GFX100. 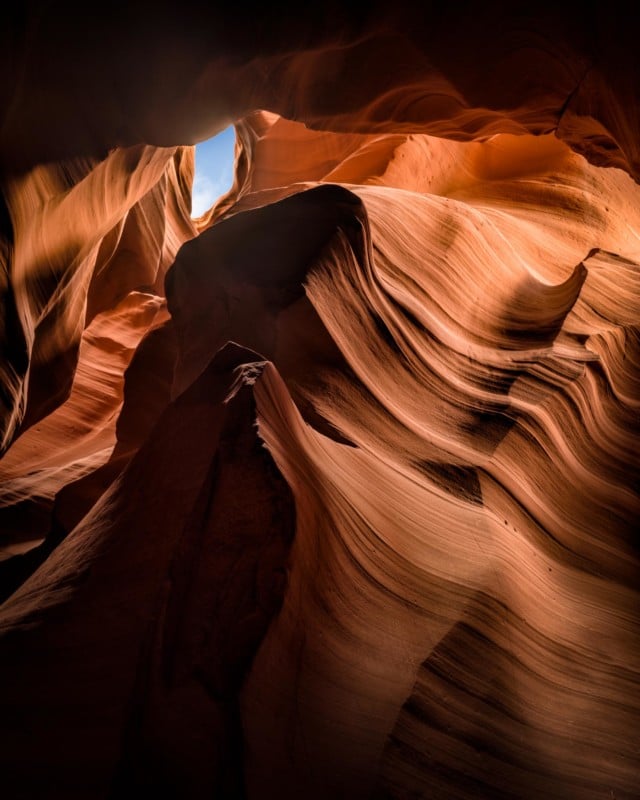 As our tour wrapped up, we went near the entrance for a few more shots of the Cathedral and Candlestick area. I knew I had shot these both years ago and was grateful for the chance to shoot them from a tripod one last time. 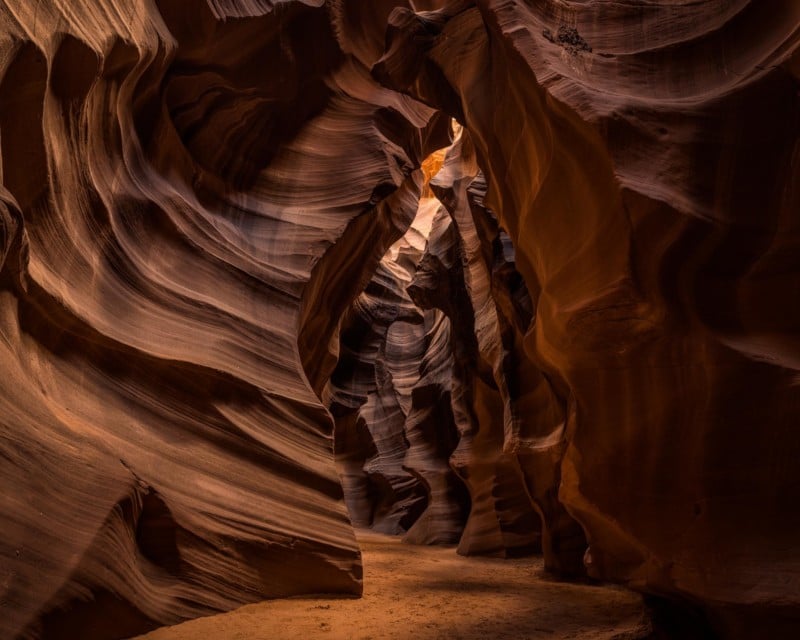 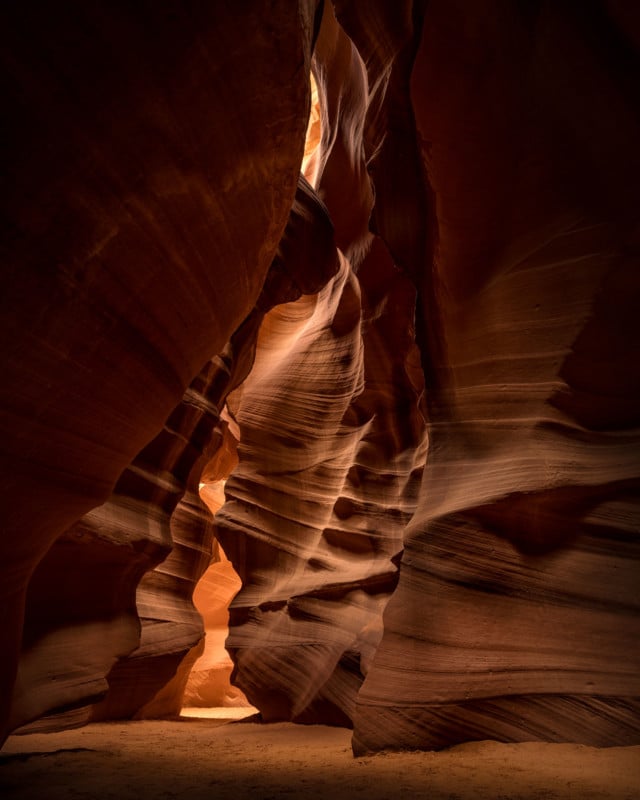 Why I agree with the decision to end photo tours

First of all, I’ll admit it’s easy for me to agree with the decision since I just got to go shoot with a tripod. Others who haven’t will probably still disagree with it, which is understandable. But, having spoken to some of the Navajo guides, I get the sense that the decision was really about elevating the experience of the “regular” tour far and above what it is right now.

This all brings us to the final question: will I go back to Antelope Canyon someday, knowing that I cannot bring a tripod?

Sure! I love the Page area and desperately want to go to Monument Valley again, so I’d have no problem swinging by the canyon again for another visit. I actually think I’d enjoy going on a regular tour without worrying about camera settings! I get lost behind the lens and get upset with myself when I see pictures that I don’t remember seeing with my own eyes.

At the end of the day, Antelope Canyon is a bit polarizing among photographers because it’s one of those places where every picture of it has probably been taken. It’s sad that tripods won’t be allowed anymore, but I get it. It will make the overall experience better for everyone at the canyon, and that’s nothing but a great thing.

About the author: Andy Luten is a Dallas-based travel photographer and blogger whose popular travel blog shares the wonder and joy of traveling. To see more from Luten, visit Andy’s Travel Blog or give him a follow on Facebook and Instagram. This post was also published here.

Stunning Macro Footage of ‘Miniature Planets’ Made of Paint, Oil, Ink, and Soap