People have forgotten about umbrellas, they don’t use umbrellas, but umbrellas are a gorgeous way to light. So let’s take a look at them — see how to use them, set them up, and see the different qualities of light with different umbrellas.

The model helping us with these demonstrations is Regan Savanna.

If you shoot a light through an umbrella, you get a gorgeous soft light, especially through a large umbrella.

If you have a bunch of lights on camera and you need a light to bounce into the background, light to go into the ceiling and several things in the same setup, it’s inexpensive to get several setups to make that happen.

#3. Mounts Built in to Most Lights

About every light has a place to put an umbrella so you can put it on your strobe or hot light and just start to shoot. You don’t need that extra piece of equipment!

They are super compact and easy to roll up and just throw in a bag.

They throw light everywhere! It’s hard to control the light as it just bounces and goes everywhere. So you have to know how to use them and you can use them correctly and control your light.

Another part of that problem with not being able to control them, you can put a grid on it. With a softbox you can narrow the light, but with an umbrella you can’t have control like that.

It’s difficult to narrow the angles and direct the light.

But I’m going to show you a way to use it that does work and creates a great soft beautiful light.

I want to set up a portrait so you can see how beautiful you can make this light look. But before we get to that I was to look at the different sizes, silver vs shoot-through, and look at that quality of light on Regan’s face comparing side by side.

Before we shoot our first test, it’s really important to know how to set am umbrella up. Some people just throw the umbrella up and walk away and they don’t think about this area of coverage here, which is co critical for how this is going to function. 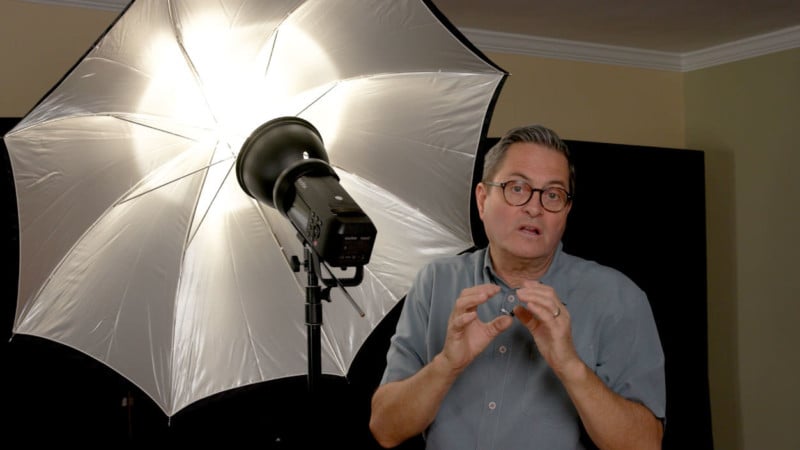 This light is very close to the umbrella, which is making the source very hard. It’s just using this small part of the umbrella! 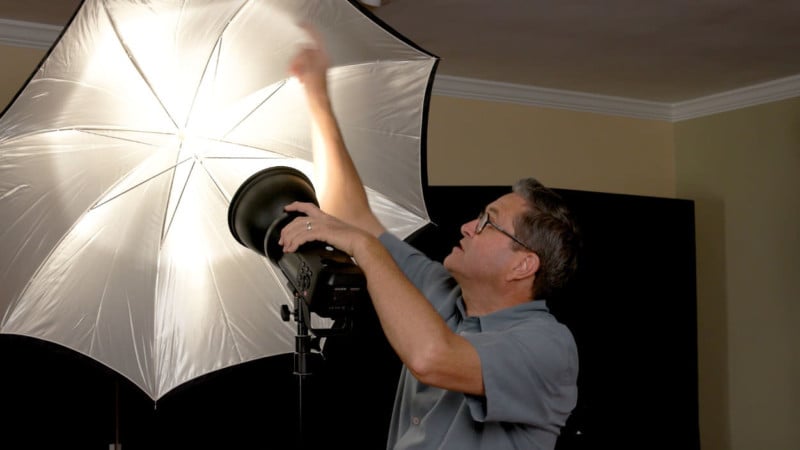 If I pull this out, I allow this to open up and to fill all of that umbrella area and it’s going to become a softer light. We utilize the entire umbrella when I do that. 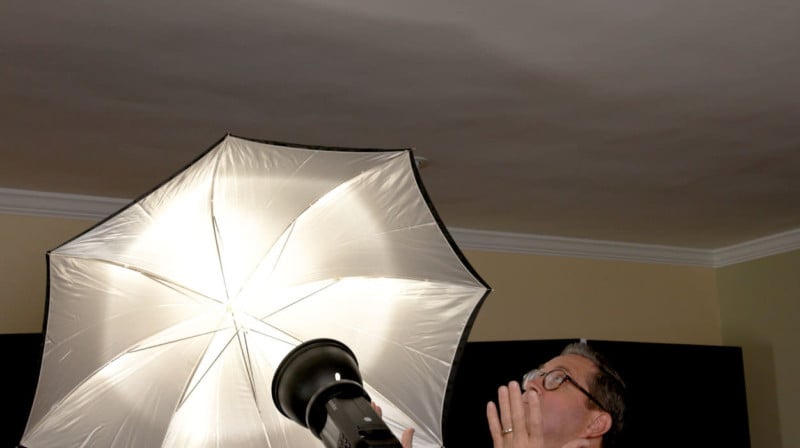 When I go too far though, it starts to spill out of the umbrella, and I’m losing a lot of my light into the room. So I want to find the point where I keep it contained inside the umbrella but it’s still giving us a soft light. But if you want a hard look, just punch in. 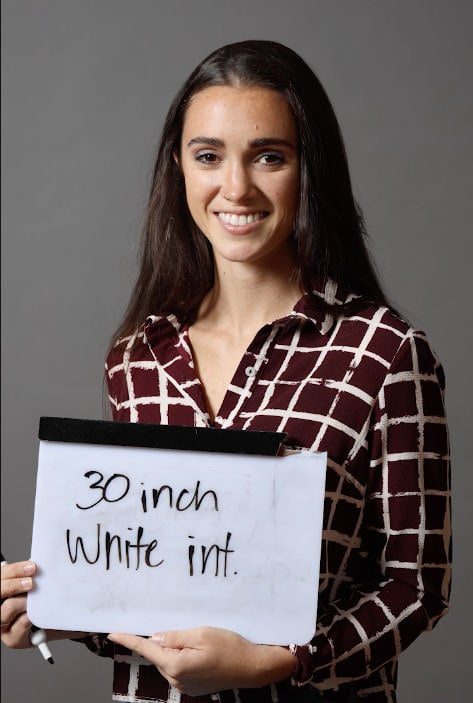 So our first umbrella is a 30-inch, white interior. It should give us a pretty soft light, but it’s a little directional because of that soft interior. 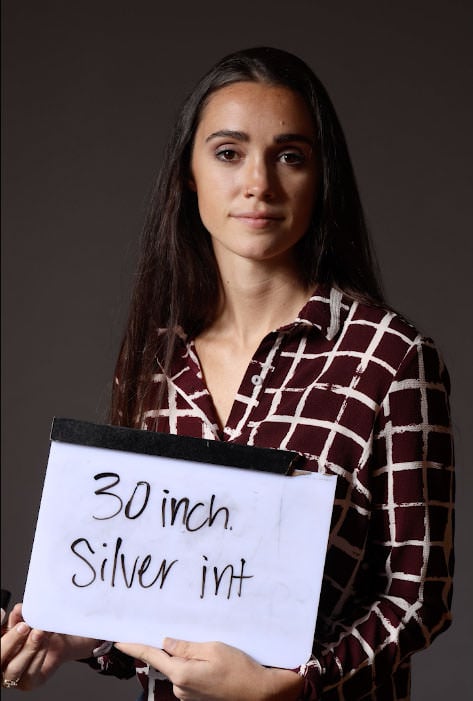 That silver interior is much more directional, and just look at the background compared to the white! 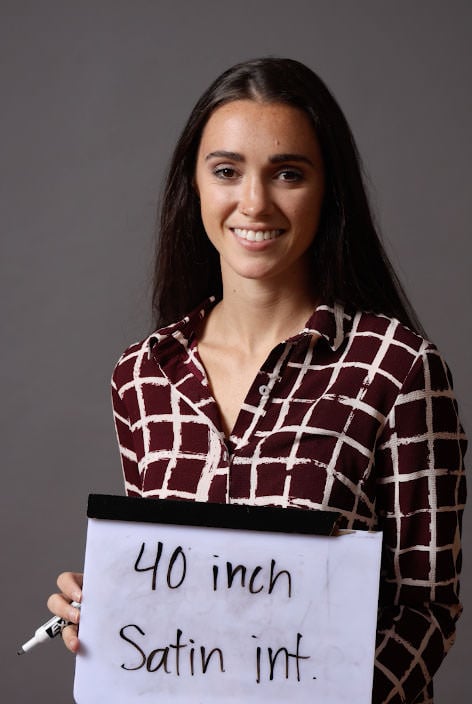 It’s already starting to transition nicer between the highlights and the shadows, and that’s how you can tell if a light is soft or hard. 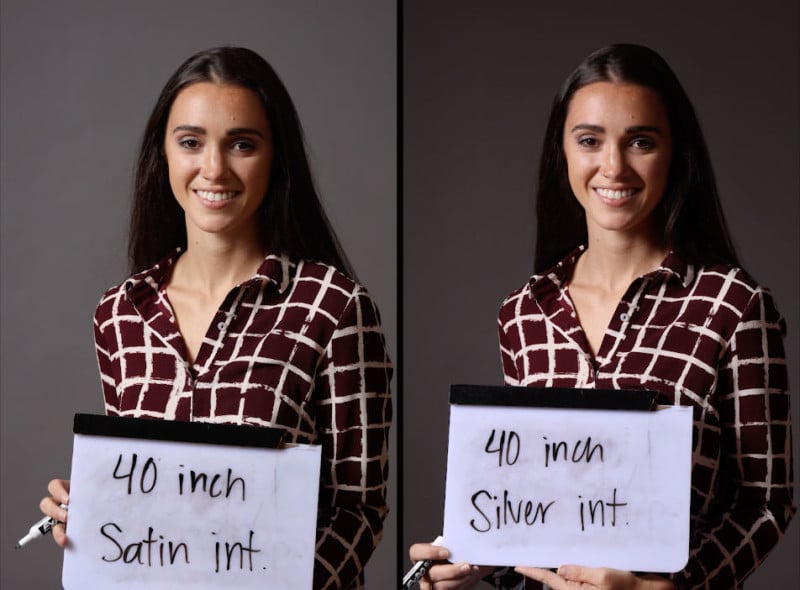 We gained a stop with the silver interior and it’s more directional and we really lost the light in the background. These two 40-inch umbrellas are very different looking, all because of the material. 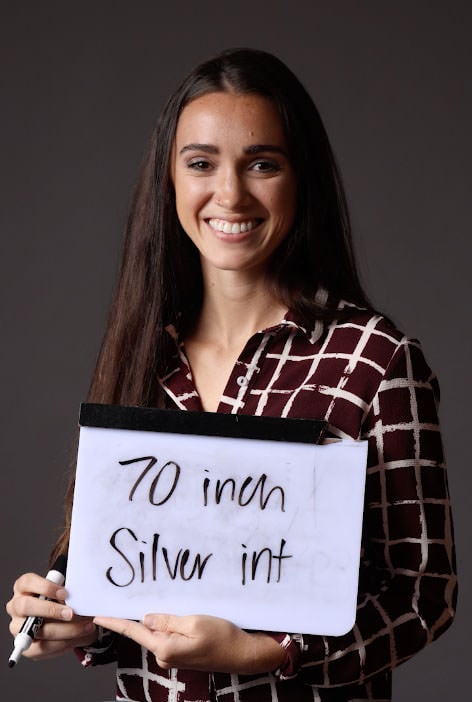 It’s a really beautiful light and it still stays pretty confined. It’s on her face, it’s not on the background very much, we do gain that 1 stop, but because of the size of it it’s starting to wrap around her face more than the 40-inch and you see that light coming into the shadow area – still a very directional light.

I don’t have a white 70-inch, but now we’re going to move to shooting through umbrellas. 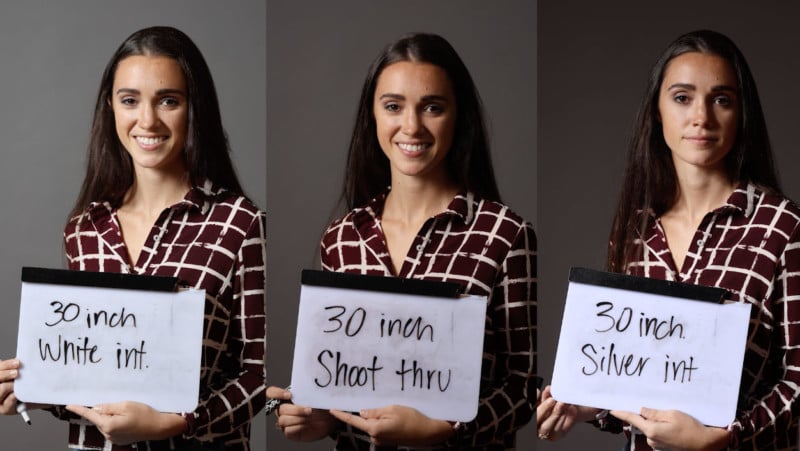 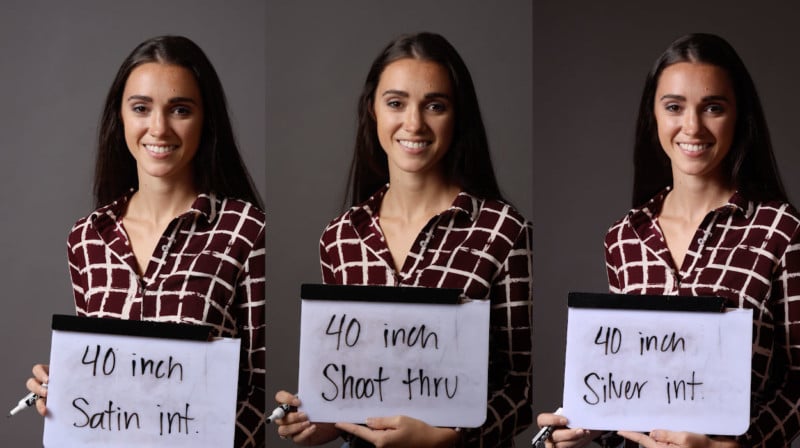 Again it combines the same qualities. It’s got the harshness and directionality of the silver, but it’s got a throw that lights the background like the white bounce did. 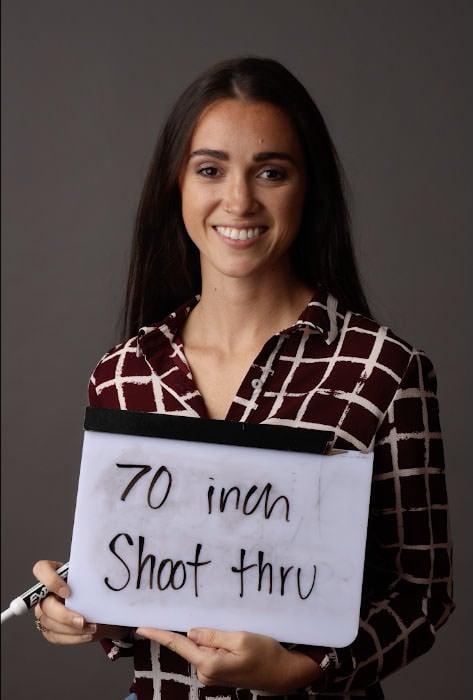 This again has got the same combination of qualities. I like the light on her face because it’s this beautiful transition. The light’s back far enough that it’s transitioning – I still have some shadow so it looks really nice on her face but it’s just a softer transition just because of the size.

The smaller the source, the harder the light source becomes. 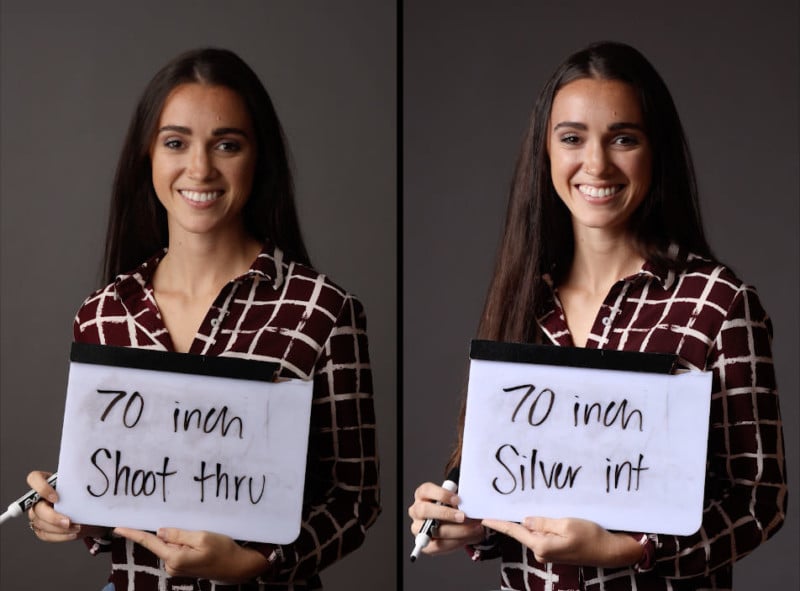 There’s a look at the 30-, 40- and 70-inch umbrellas with the different interiors and shoot-through. Which do you like the most? 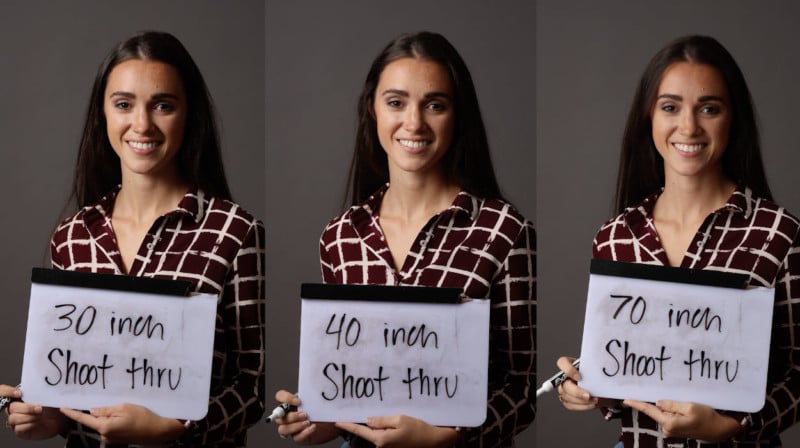 So there’s that 70-inch shoot-through just slightly behind her, I love that look. You can see the beautiful transition to the front. 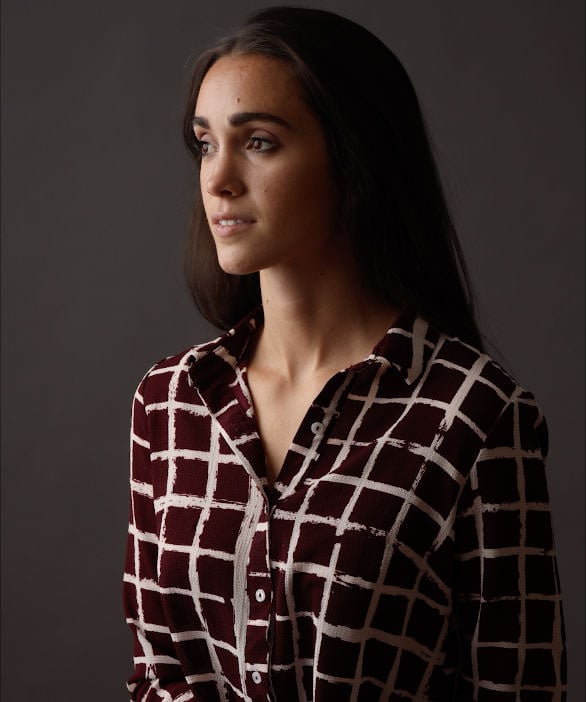 I’m going to try something here where I have someone hold the light and umbrella and go back. 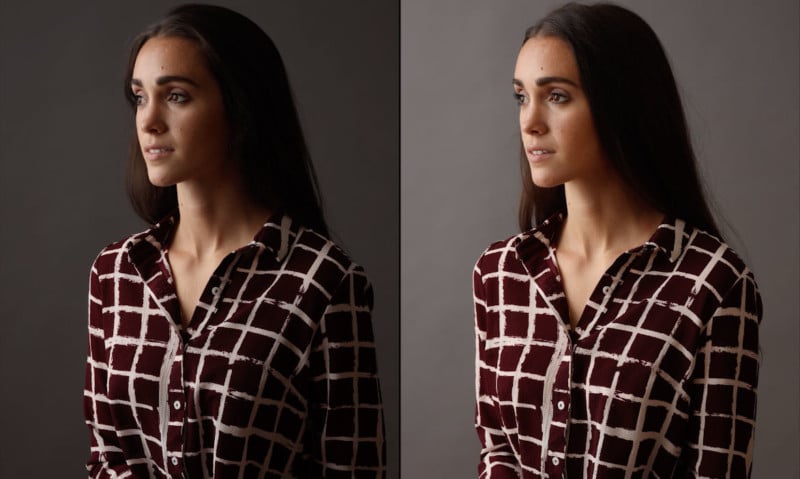 Wow! The light is so much softer when you move the umbrella back because it fills the whole umbrella and becomes a much softer source. The problem is it becomes much more out of control, the background becomes much brighter and so I like what we had originally because it was a little more directional and it was a soft light on her face, but it wasn’t all over the background as well.

So there you have it: a look at umbrellas. Don’t discredit them because everyone is using softboxes. They really have a great place in your lighting kit.

Keep those cameras rolling and keep on clicking.

About the author: Jay P. Morgan is a commercial photographer with over two decades of experience in the industry. He teaches photography through his company, The Slanted Lens, which runs a popular YouTube channel. This article was also published here.